Mi A3 global variant comes with the firmware QFQMIXM while the Mexican variant of the phone comes with QFQMXTC. 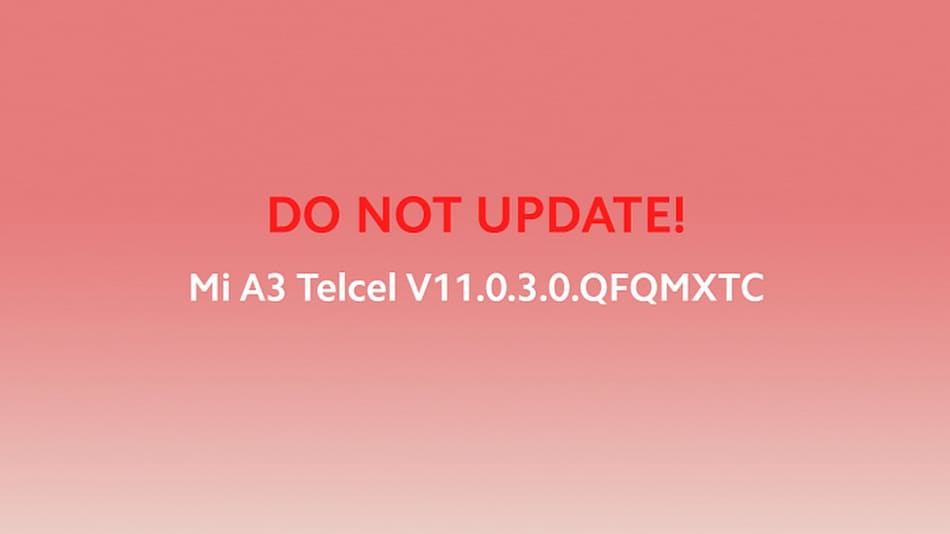 Xiaomi is having some trouble in getting the Mi A3 updates right. After stopping the Android 10 update multiple times, now, the company has rolled out a Mexican firmware update to the global variant of the Mi A3 that is creating problems for people who installed it, as per user reports. The update comes with firmware version V11.0.3.0.QFQMXTC (Mexican carrier-exclusive) instead of the QFQMIXM (global variant) to Mi A3 users and Xiaomi has warned users against installing the update.

As announced on the Mi community forum, Xiaomi has asked Mi A3 users to not install the over-the-air (OTA) V11.0.3.0.QFQMXTC update that is currently rolling out for the global variant. The users who have installed this update, which does not show up with a build number on the Android One smartphone, have complained about issues with the phone not recognising the second SIM. As the update is for the Mexican carrier Telcel exclusive Mi A3 phones, those who have installed it have also got a new boot animation.

Got a random 1.4GB update from @XiaomiIndia on my #mia3
Now my simcard isn't getting detected and when I boot my phone, there's some telcel written. Language has changed to some other. @MiIndiaSupport help. Can't make or receive calls. What kind of joke is this? pic.twitter.com/W5WtveopSs

The V11.0.3.0.QFQMXTC update is 1.4GB in size and since it does not show the build number, users believed it was the latest security patch. but it was actually a June 2020 update for Telcel Mi A3 phones.

Interestingly, Xiaomi is calling it a “serious bug” in the update that is causing the second SIM to not be recognised. It has not mentioned that this update was actually meant for Telcel Mi A3 phones in Mexico. For those who have already installed the update, the damage seems to have been done. However, Xiaomi has said that it is working on a solution that will be rolled out soon.

"We are aware of the software update issue on a few Mi A3 devices. On further investigation, we have identified it to be a technical issue due to which a software update not meant for Indian users, was shared inadvertently," Xiaomi told Gadgets 360 in a statement. "This issue has been fixed already from our side and our technical teams are working on a recovery solution that will be rolled out soon.”