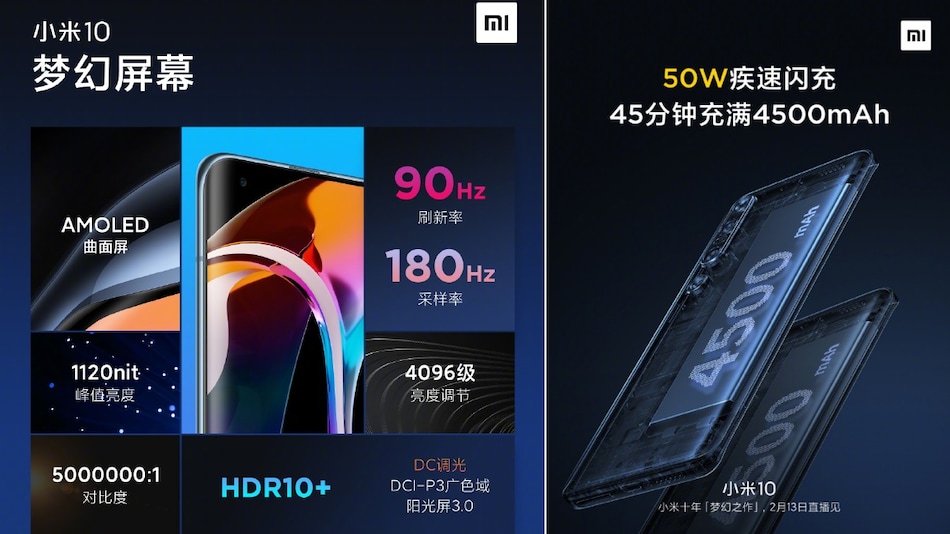 Xiaomi says the Mi 10’s display has been professionally calibrated

Xiaomi Mi 10 unveiling is just a day away, and as the launch event inches closer, the company has dropped more teasers for its upcoming flagship phone. Xiaomi's new teasers reveal a tonne of new details about the Mi 10, such as a 90Hz curved display with a hole-punch, dual stereo speakers, and support for 8K video capture. Additionally, the phone will pack a 4,500mAh battery with support for 50W wired charging, as well as fast wireless charging at 30W and reverse wireless charging support.

The official Xiaomi Weibo account shared via a post that the Mi 10 will feature a curved AMOLED display with a single hole-punch and 1,120 nits peak brightness. The panel will have a 90Hz refresh rate and 180Hz touch sampling rate. The Mi 10's HDR10+ display is claimed to have been professionally calibrated and will offer a contrast ratio of 5000000:1, complete with DCI-P3 colour gamut support.

The company says it has achieved industry-leading Delta E and JNCD measurements for the phone's AMOLED display. It also comes with TUV-Rheinland certification for protection against blue light exposure. The Chinese smartphone maker also touts native DC Dimming for its upcoming flagship phone.

Xiaomi says the Mi 10, which has officially been confirmed to pack a quad rear camera setup, will let users record 8K videos at an astounding 7680x4320 pixel resolution. The Mi 10 will also come equipped with dual stereo speakers for a surround sound experience, and will also bundle in Wi-Fi 6 support. The Mi 10 will be powered by the Qualcomm Snapdragon 865 SoC, paired with 8GB of RAM, as per a Geekbench listing.

Xiaomi has also revealed that the Mi 10 will feature 4,500mAh battery that offers 50W wired Flash Charge support, which is claimed to fully top up the battery in 45 minutes. Additionally, the phone also supports 30W wireless charging and 10W reverse wireless charging. The Xiaomi Mi 10 is said to pack a 108-megapixel main camera that employs the ISOCELL Bright HMX sensor from Samsung. The Mi 10 will reportedly be accompanied by a more powerful version – tentatively called the Mi 10 Pro – that will go official at tomorrow's event.

Mark Zuckerberg to Meet EU Commissioners Ahead of Antitrust Proposals