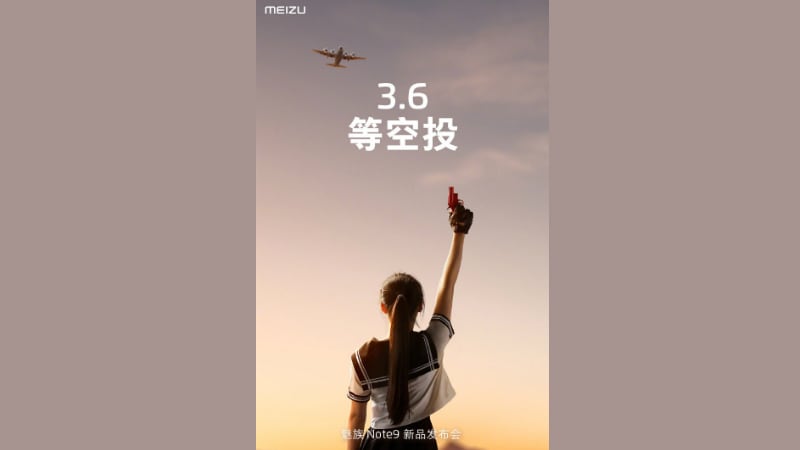 Meizu Note 9 will not launch on March 6

Meizu Note 9 or Meizu M9 Note has been leaked on several occasions, and now the company has finally confirmed its upcoming existence. Meizu has confirmed that the Note 9 smartphone will be launched in China on March 6. The manufacturer also confirmed that the phone will be called the Meizu Note 9 and not the Meizu M9 Note. The phone has previously been spotted on TENAA revealing key specs and design details. A separate phone called the Meizu 16s has also been leaked in a spy photo revealing the front design.

Meizu has published a poster on Weibo revealing the Note 9 launch date. The poster confirms that the phone will be launched on March 6 in China. Apart from this, the poster reveals little else about the device. The phone has already appeared on TENAA, and the listing hints that the phone will sport a waterdrop-style notch and a slight chin at the bottom. It is seen with a glossy white back panel, which houses the dual camera setup aligned vertically and a rear fingerprint sensor. It should don a metallic frame housing the power and volume buttons on the right edge and the SIM tray on the left edge. In the photos listed on TENAA, the camera setup is seen to jut out just a little bit, but it is protected by a metallic ring.

Leaked specifications include Android 9 Pie OS, 6.2-inch full-HD+ (1080x2244 pixels) IPS display, Snapdragon 675 SoC, 6GB of RAM, and 64GB of onboard storage that could be expandable via microSD card. The phone is said to feature a 48-megapixel primary sensor and a 5-megapixel secondary sensor. The TENAA listing also mentions a 20-megapixel selfie camera and a 3,900mAh battery. Additionally, the phone is found to have 153.11x74.34x8.65mm dimensions and weighs 169.7 grams. Furthermore, it will reportedly come in Dark Ochre, Silver Ochre, and Starry Blue colour options.

Separately, a new device called the Meizu 16s has surfaced on the net, and the spy photo reposted by GizChina reveals that it will sport a notch-less display with really narrow forehead that will house the camera and the earpiece. The phone gives an illusion of a bezel-less display, because the chin is very thin. The report states that Meizu CEO, Huang Zhang has revealed few key details about the phone including that it will sport a 6.2-inch display with 19.5:9 aspect ratio, Corning Gorilla Glass protection, and will be 1.5mm thinner than the predecessor Meizu 16.

It will be powered by the Snapdragon 855 SoC, pack 3,600mAh battery, and sport a Sony IMX586 48-megapixel camera. The executive revealed that the Meizu 16s will be launched in April or May with productions beginning from March otself. It should be priced around CNY 3,300 (roughly Rs. 39,900).