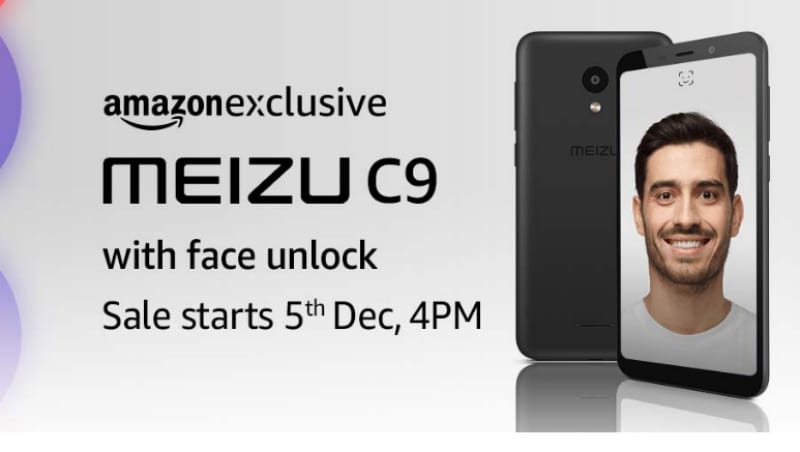 In line with what we reported before, Meizu is all set to launch a third smartphone alongside the M16th and M6T. Amazon now has dedicated page for the Meizu C9 smartphone, with sales starting on December 5. Meizu has earlier confirmed a New Delhi launch event on December 5 to launch the M16th and M6T, and now it has also confirmed that the Meizu C9 will also launch alongside. The page has also lists few specifications of the Meizu C9, and it looks to run on stock Android and support Face Unlock as well.

According to the Amazon India listing, the Meizu C9 will go on sale in India on December 5 at 4pm IST. The e-commerce site is already taking registrations for the sale notification. The image attached with the listing shows the Meizu C9 sporting a single camera setup at the back, rear speaker grille, visible bezels on the top and bottom of the display, and volume and power buttons on the right edge. The smartphone will be made available in Black and Gold colour options after launch. While the smartphone is confirmed to be an Amazon exclusive, its pricing will be announced at the launch event.

The listing suggests that the Meizu C9 will sport stock Android Oreo. The Meizu C9 features a 5.45-inch HD+ display, 18:9 aspect ratio, and 295ppi pixel density. It is powered by the 1.3GHz quad-core processor paired with 2GB of RAM. Internal storage is at 16GB with the option to expand further using a microSD card slot (up to 128GB).

As for camera, there is going to a 13-megapixel rear camera with f/2.2 aperture and LED flash support, and an 8-megapixel selfie camera with same aperture and Face Unlock support as well. The Meizu C9 is listed to pack a 3,000mAh battery, and connectivity options include Bluetooth v4.1, 4G VoLTE, and GPS + GLONASS.