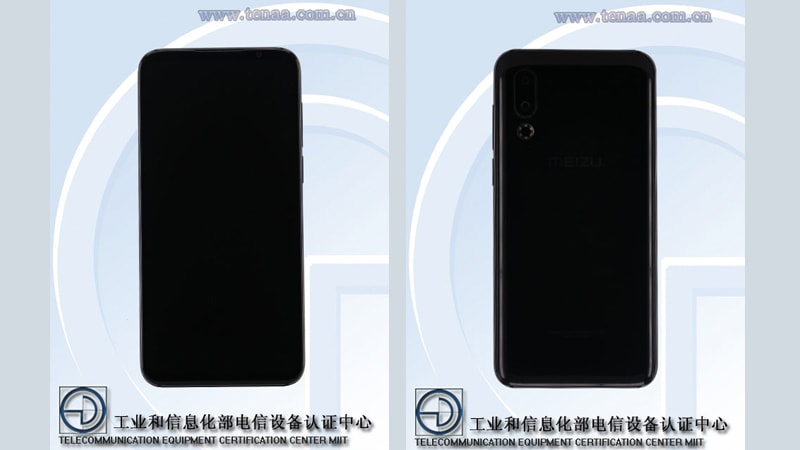 Meizu 16s is thought to have been listed on TENAA with model number M971Q, complete with images and specifications. The smartphone has been in rumours for a while, said to be a flagship-grade smartphone running on Qualcomm's top-end Snapdragon 855 SoC and sporting a 48-megapixel Sony IMX586 sensor. The TENAA listing reveals pretty much everything about the upcoming smartphone. The Meizu 16s is an upcoming smartphone that the company is expected to launch sometime later this month, but price and availability details are unknown at the moment.

The TENAA listing of the Meizu 16s reveals that the phone will sport a 6.2-inch AMOLED display, a 3,540mAh battery, and measure 151.9x73.4x7.65mm. As no fingerprint sensor is visible on the rear panel, it is likely to have an in-display fingerprint scanner. Near complete specifications on a new TENAA listing note the smartphone will run Android 9 Pie, feature an octa-core processor clocked at 2.8GHz (probably the Snapdragon 855 as previously rumoured) coupled with 8GB of RAM, offer 128GB of inbuilt storage,  and weigh 166 grams. Unfortunately, camera details are not mentioned.

Fonearena cites previous leaks to add that the Meizu 16s will sport a 6.2-inch Super AMOLED display with full-HD+ (1080 x 2232 pixels) resolution, a Qualcomm Snapdragon 855 SoC, 6GB RAM and 8GB RAM options, as well as two storage variants - 128GB and 256GB. Meizu is expected to launch the smartphone with Flyme OS based on Android 9 Pie.

The Meizu 16s is also expected to have a dual camera setup at the back consisting of a 48-megapixel primary Sony IMX586 main sensor with a 0.8-micron pixel size. There is a secondary camera as well but the details are unknown at the moment. It is seen to have a ring LED flash similar to what we have seen on the Meizu M16th. At the front, it has a 20-megapixel selfie shooter. A spy shot of the Meizu 16s had leaked in the past and some of the specs do match to what was rumoured earlier.

Finally, the Meizu 16s is said to have a USB Type-C port and its 3,540mAh battery is said to support 24W mCharge fast charging. It will have support for dual-band Wi-Fi 802.11ac, Bluetooth 5, GPS and GLONASS. We will have to wait for the phone to break cover for more details like price and if it will make its way to India.