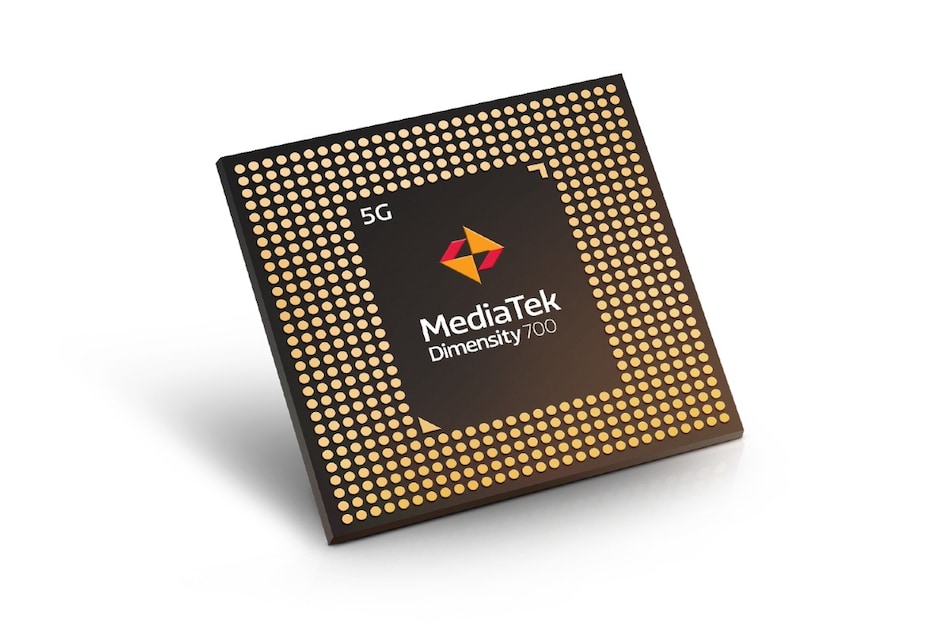 MediaTek at its Executive Virtual Summit 2020 on Tuesday unveiled the Dimensity 700 as the latest 7nm 5G chipset for “mass-market” smartphones. The new system-on-chip (SoC) comes over three months after the Taiwanese chipmaker brought the Dimensity 720 as a solution for mid-range 5G phones. Alongside the new Dimensity SoC, MediaTek launched two new chipsets for Chromebooks — the MT8195 and the MT8192. The company also teased its plans to bring a new high-end, 5G-supporting SoC for smartphones that would be based on 6nm process technology and include ARM Cortex-A78 cores.

Architecture-wise, the MediaTek Dimensity 700 SoC is quite similar to the Dimensity 720. The chip includes two high-performance ARM Cortex-A76 cores at a maximum clock speed of 2.2GHz, along with six Cortex-A55 cores at 2.0GHz. It is also capable of being paired with up to 12GB of LPDDR4x RAM at a frequency of 2,133MHz and UFS 2.2 two-lane storage, along with up to 1Gbps transfer speeds.

Nevertheless, the Dimensity 700 SoC supports full-HD+ display with up to 90Hz refresh rate. The chip is also capable of supporting up to 64-megapixel primary camera sensors, along with artificial intelligence (AI) camera enhancements, such as AI bokeh as well as AI colour and beauty features.

In terms of connectivity, the MediaTek Dimensity 700 SoC comes with a 5G modem that supports carrier aggregation to deliver up to 2.77Gbps download speeds and seamless handover between two 5G connection areas. There is also dual-5G SIM support that will allow users to have two 5G networks on their smartphones simultaneously. For power efficiency even on 5G networks, the chipset includes MediaTek 5G UltraSave that is touted to intelligently manage the operating mode of the 5G modem to enhance battery life.

The Dimensity 700 SoC also includes multiple voice assistant support including Amazon Alexa, Google Assistant, and Baidu DuerOS, among others. There is also support for Voice over New Radio (VoNR) services.

MediaTek is aiming to bring the Dimensity 700 SoC to the smartphone market in the first quarter of 2021. Moreover, the chipset is expected to power phones under $250 (roughly Rs. 18,000) price segment.

Alongside the Dimensity 700, MediaTek at its Executive Summit announced the MT8192 and MT8195 SoCs for Chromebooks. The 7nm MT8192 is specifically designed for mainstream Chromebook models, while the 6nm MT8195 is targeted at premium versions. Both chipsets come with an AI processing unit (APU) to support a range of voice- and vision-based apps. The APU is designed to process voice ID recognition and voice control, speech and image recognition, speech to text, live translation, object recognition, background removal, noise reduction, image and video segmentation, gesture control, and Google AR Core-based enhancements.

In contrast, the MediaTek MT8195 SoC includes four ARM Cortex-A78 cores alongside four power-efficient ARM Cortex-A55 cores. The chipset is paired with MediaTek's APU 3.0 that is capable of delivering up to 4 TOPS performance. There is also support for LPDDR4x RAM at 2,133MHz. The MT8195 can support up to three displays at once. There are also features including Dolby Vision, 7.1 surround sound audio, and a Codec AV1 video accelerator.

Chromebooks featuring the MT8192 will debut in the second quarter of 2021, while the devices powered by the MT8195 will be available at a later date.

Fantastic Beasts 3: Mads Mikkelsen Said to Be in Talks to Replace Johnny Depp as Gellert Grindelwald