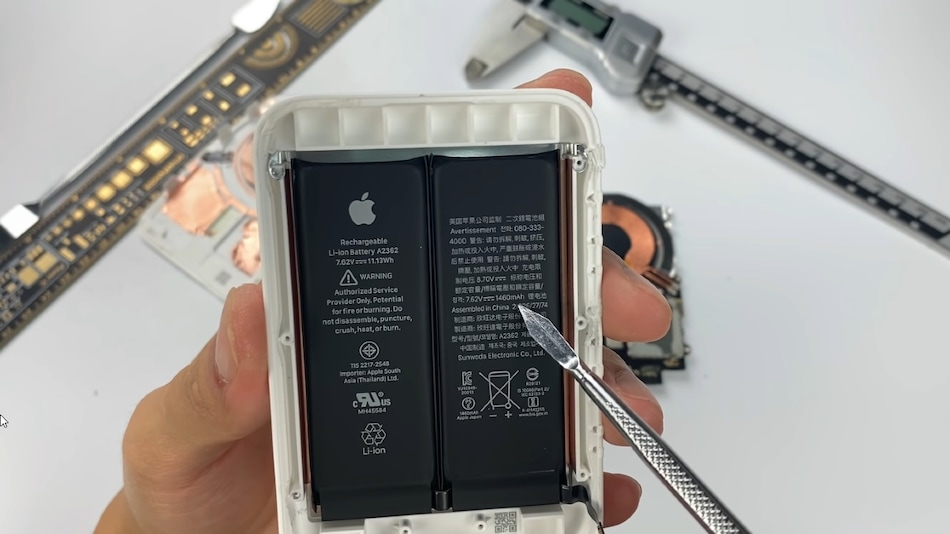 MagSafe Battery Pack was launched earlier this month by Apple for its iPhone 12 series. A teardown of this wireless on-the-go battery charger reveals the battery capacity and other details. The MagSafe Battery Pack has two identical batteries integrated inside and each are labelled as 5.733Wh. In total, the MagSage Battery Pack has a capacity of 1,460mAh and the voltage is at 7.62V. The teardown also offers extensive details about the circuits inside the battery pack, along with heat dissipation and other details.

The latest teardown has been published by ChargerLAB on YouTube. In the video, the MagSafe Battery Pack from Apple is completely dismantled to show its viewers the internals and the battery capacity. The cover itself has two copper coils, with one that is connected to an NFC chip. Once the PCB module is removed, two batteries of identical sizes are revealed. The total capacity of 1,460mAh is quite less for a battery pack, especially when compared to other third-party battery packs out there.

A metal heat sink and a copper foil are attached to the shell for better heat dissipation. ChargerLAB goes on to detail all the circuits and silicon on the PCB module. You can watch the full video below:

Apple's MagSafe Battery Pack carries a price tag of Rs. 10,900 in India ($99 in the US). It is currently available for orders in the US. The Apple India online store has also listed the battery pack, but delivery is listed to be ‘currently unavailable.'