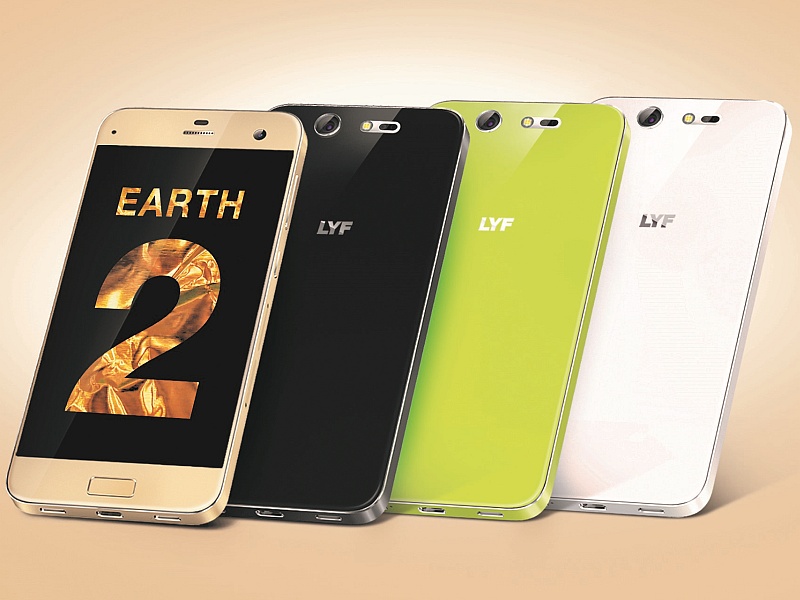 Reliance Retail's Lyf brand on Monday launched a new smartphone in India, the Lyf Earth 2, at an event in Mumbai. The smartphone is the most expensive Lyf-branded handset yet, priced at Rs. 21,599. It will be available in Black, Green, Gold, and White colour variants.

The company is touting the Lyf Earth 2's Smart+ Security, as the smartphone has three security features - a conventional pattern/PIN based unlock, a retina unlock, and a fingerprint sensor. Users can also encrypt the photos and videos stored in the gallery, as well as encrypt various social media applications. The company is also touting the Smart+ Sense features, which are gesture and touch-based shortcuts.

The dual-SIM Lyf Earth 2 (Nano-SIM + Micro-SIM) support 4G on both SIM slots, but only one slot can be connected to 4G networks at a time. The smartphone sports a 5-inch full-HD (1080x1920 pixel) IPS display, and runs Android 5.1.1 Lollipop.

The smartphone bears 32GB of inbuilt storage, which is expandable via microSD card (up to 64GB). The Lyf Earth 2 is powered by a 2500mAh non-removable battery that's rated to deliver up to 14 hours of talk-time on 4G, and up to 480 hours of standby time. Connectivity options include 4G LTE, VoLTE support, Wi-Fi 802.11 b/g/n, Bluetooth v4.0, GPS, and Micro-USB.

It weighs in at 140 grams, and measures 142x67x7.2mm. Sensors on board the Lyf Earth 2 include an accelerometer, proximity sensor, ambient light sensor, gyroscope, and a digital compass.

Speaking on the launch, Sunil Dutt, President - Devices, Reliance Retail, said, "LYF Smartphone+ is a consumer obsessed brand and through Earth 2 we present the most advanced features in smartphones that deliver a differentiated digital experience to our consumers and puts the controls of smart devices in the hands of the consumers."