A price cut of almost Rs. 40,000 has been introduced on the LG Wing 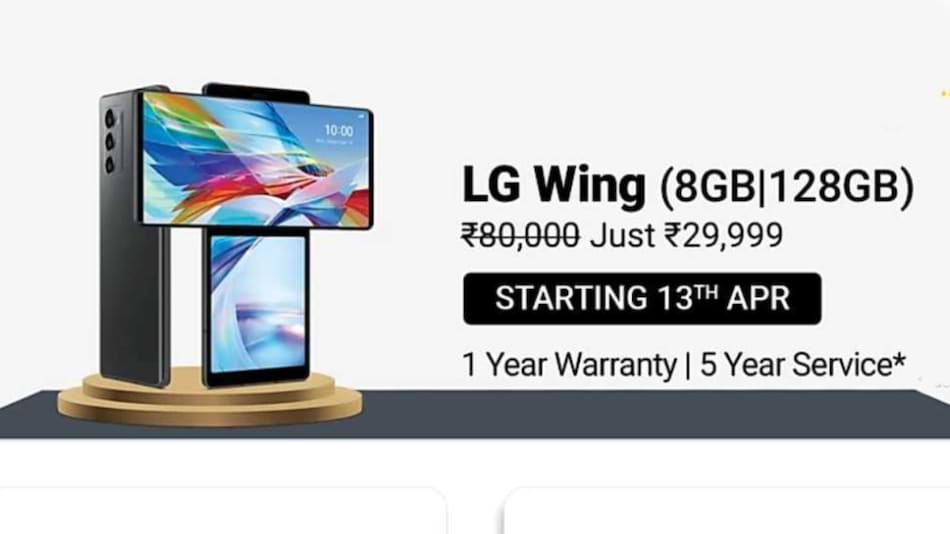 LG Wing will be available with a massive price cut of almost Rs. 40,000 in India. The phone was launched with a price tag of Rs. 69,990, but it will be up for grabs for an all-time low price of Rs. 29,999 on Flipkart. This means a massive price cut of almost Rs. 40,000 will be introduced on the phone, for the very first time. This comes soon after LG announced its decision to draw the curtains on its mobile division. The company will continue to sell products till inventory lasts, and plans to completely close down by July 31 this year. Flipkart lists one-year warranty and five-year service for the LG Wing.

This is the second such discount from LG in recent times; during the major sales near the end of 2020, it also discounted the LG G8X ThinQ in a similar manner.

Flipkart has listed the LG Wing (Review) at a discounted price of Rs. 29,999, instead of its launch price of Rs. 69,990 in India. This is for the 8GB RAM + 128GB storage model that was the only one made available in India. The phone will go on sale at this low price point starting April 13 i.e. Tuesday. The phone comes in Aurora Grey and Illusion Sky colour options. In our review, we called the LG Wing a good buy with unique features, even at its price — with this discount, it becomes an attractive option for someone who wants a phone that truly stands out.

While announcing its withdrawal from the smartphone market, LG did say that inventory of some existing models will be available. The company may be reducing the prices in the hopes to exhaust its inventory and stockpile, to properly close the mobile business before the mentioned date of July 31.

For photos and videos, the LG Wing flaunts a triple rear camera setup that houses a 64-megapixel primary camera, 13-megapixel secondary sensor, and a 12-megapixel tertiary sensor. The LG Wing also comes with a 32-megapixel camera sensor on a pop-up module.

In terms of storage, the LG Wing comes in 128GB of internal storage options that is expandable via microSD card (up to 2TB). Connectivity options include 5G, 4G LTE-A, Wi-Fi 802.11ac, Bluetooth v5.1, NFC, GPS/ A-GPS, and a USB Type-C port. The phone also comes with an in-display fingerprint sensor. The LG Wing packs a 4,000mAh battery that supports Quick Charge 4.0+ 25W fast charging as well as 10W wireless charging.