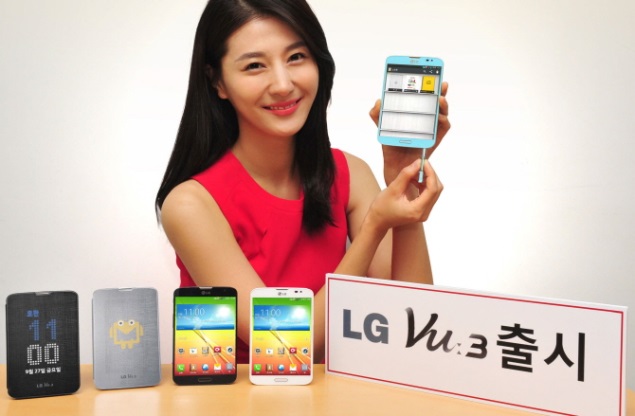 LG has finally taken the wraps off the third generation of the Optimus Vu smartphone in Korea. However, the company has not revealed the pricing and availability details of the new phablet, yet.

The LG Vu 3 comes with a 5.2-inch IPS display with a 960x1280 pixel resolution. It is powered by 2.26GHz quad-core Snapdragon 800 (MSM8974) processor, coupled with a 480MHz Adreno 330 GPU. The device sports a 13-megapixel rear camera and a 2.1-megapixel front-facing camera, both with BSI. It comes with 2GB of RAM and includes 16GB of inbuilt storage, though there is no word for now about expandable storage.

It also includes speakers that can deliver high-quality 24-bit/192KHz audio, which were first seen on LG's flagship smartphone, the G2. The company has also included Carrier Aggregation (CA) technology that doubles the speed of LTE-Advanced. The LG Vu 3 runs Android 4.2.2 Jelly Bean and packs in a 2610mAh battery (unspecified talktime and standby time). Connectivity options include Wi-Fi, Bluetooth, NFC, AGPS and Micro-USB. The device comes with dimensions 132.1x85.6x9.4mm and weighs 161 grams. It will come in three colour variants - Indigo Black, Mint and White.

Earlier this month, a Korean report noted that the South Korean major will officially announce the LG Vu 3 at the end of September while the device will be released in October. Additionally, the company had teased few images of the QuickView cases for the LG Vu 3.

India will not accept surveillance by any country: Kapil Sibal
New iOS 7 security bug allows anyone to make calls from locked iPhone