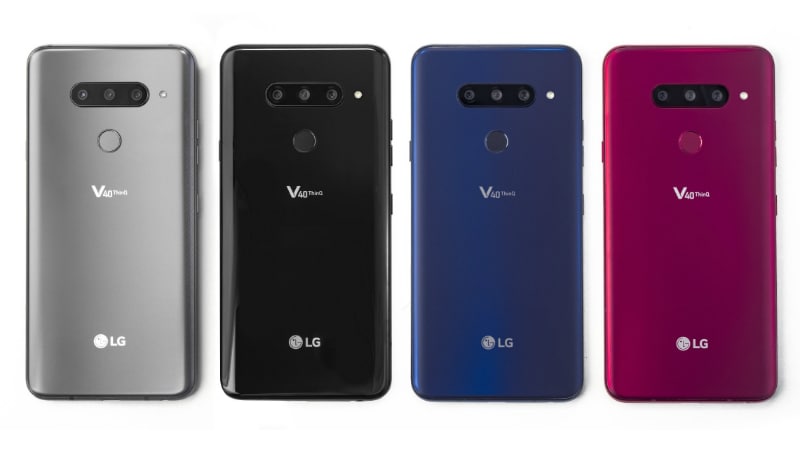 LG V40 ThinQ has gone official at LG's launch event in New York City event on Wednesday, after having been silently announced by the South Korean giant last week. This is the successor to last year's LG V30 and also the company's first phone to sport a total of five cameras — three on the back and two on the front. Other highlights of the LG V40 ThinQ include a Snapdragon 845 SoC, IP68 water and dust resistance, Military-grade build (MIL-STD-810 certification), Boombox speaker and a 19.5:9 OLED display with a notch up top. The smartphone focuses a lot on audio technology with an improved Boombox speaker, 32-bit Hi-Fi Quad-DAC audio, and DTS:X 3D surround sound. Let's get into the LG V40 ThinQ price and specifications.

LG V40 ThinQ price will start in the US at $899.99 (roughly Rs. 66,400) and will vary depending on mobile carrier. The phone will be made available in Aurora Black, Moroccan Blue,Platinum Gray, and Carmine Red colour options, though only the first two colours have been announced for the US market. It will go on sale in the country starting October 18.

The LG V40 ThinQ runs Android 8.1 Oreo out-of-the-box, and sports a 6.4-inch QHD+ (1440x3120 pixels) OLED FullVision panel with a 19.5:9 aspect ratio and Corning Gorilla Glass 5 protection. The phone is powered by the flagship octa-core Qualcomm Snapdragon 845 SoC, paired with 6GB of LPDDR4X RAM and 128GB of UFS2.1 inbuilt storage. Storage on the handset is expandable via microSD card (up to 2TB).

A new Triple Preview feature is also available on the LG V40 ThinQ that lets users take three simultaneous shots from the three rear cameras to enable you to pick the best among them. The rear camera setup also comes with Dual Phase Detection Auto Focus (PDAF), HDR, and an updated AI Cam mode. The third-gen AI Cam mode recognises up to 19 subjects and recommends 4 optimised filter options.

Connectivity options on the LG V40 ThinQ include 4G LTE, Wi-Fi 802.11ac, Bluetooth v5.0 LE, GPS, NFC, USB Type-C, and a 3.5mm headphone jack. Dimensions of the phone are 158.7x75.8x7.79mm and it weighs 169 grams. There is a 3,300mAh battery under the hood, with support for Qualcomm Quick Charge 3.0 and fast wireless charging. Other features include a rear-facing fingerprint sensor, face recognition for security as well as DTS:X 3D Surround Sound, Boombox Speaker and 32-bit Hi-Fi Quad DAC tuned by Meridian for better audio.

US Judge Says China's ZTE Violated Probation; Extends Monitor's Term
Toyota and SoftBank Said to Team Up in Self-Driving and Other Technology