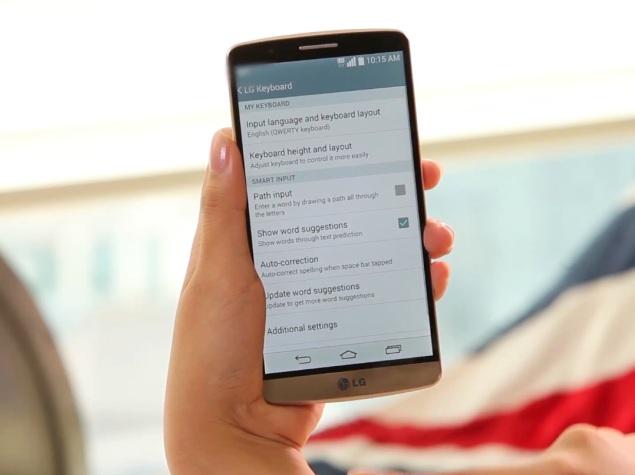 LG on Thursday announced an update to its Smart Keyboard for the LG G3, saying it includes new features that will make 'typing less tedious.' The update will roll-out this month via LG's update centre.

The South Korean giant says the Smart Keyboard update will give G3 owners 'a host of enhancements which have rarely been found on OEM keyboards.'

The new features the update for the LG G3's Smart Keyboard brings include 'Emoji Suggestion', which recommends the most appropriate emoticon to represent a specific word. For instance, typing "love" will result in the Smart Keyboard recommending the heart symbol from its emoji database.

Also new, is the 'Application-based Text Tone Suggestion', which LG says learns from users' typing habits to suggest the most commonly used words depending on the application. For example, if users often start emails with "Dear," the word will be recommended next time they open the email app.

LG is also touting the new 'Next Word Suggestion' feature, which with contextual analysis of a user's typing over time suggests the next word or symbol. The Smart Keyboard will also get 'Bilingual Word Suggestion', which automatically detects what language the user is trying to type, and switches to the correct language without requiring the user to manually switch languages.

The last new feature that LG is touting on the updated G3 Smart Keyboard is 'Real-time Path Input', which like Swype and other such keyboards, lets users by tracing their finger in one continuous motion across the keyboard. Recommended words will show up in real time as the word is being traced.

Dr. Jong-seok Park, President and CEO of LG Electronics Mobile Communications Company, said of the update, "While Smart Keyboard is just one piece of a larger UX, it's a significant feature in that it improves upon a very fundamental feature that all smartphone owners do - typing on a cramped keyboard. From the very beginning of G3's development, we tried to learn as much as we could about the way consumers interact with their smartphones. This Smart Keyboard update is a clear example of LG's continuing effort to provide a better and improved user experience."
Comments