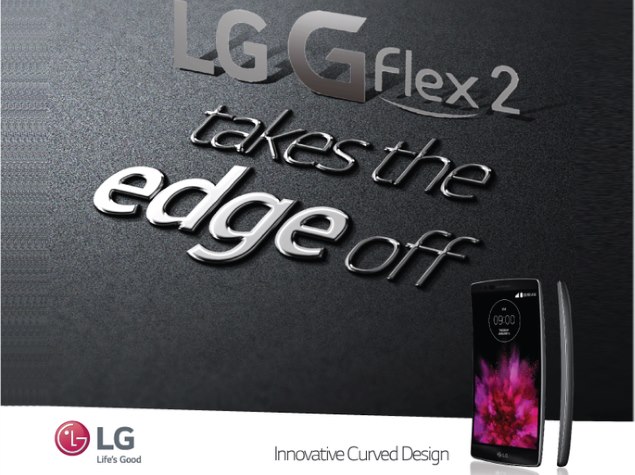 After the Samsung Galaxy S6 Edge 'bendgate' controversy began last week, followed by the denial of any fragility by Samsung with its own 3-point bend test earlier this week, LG on Monday mocked its Korean-competitor with an image of the LG G Flex2 on Twitter.

To remind you, last week SquareTrade posted a video showing the Samsung Galaxy S6 Edge being put through a bend test alongside the iPhone 6 Plus and HTC One M9.

The video showed that the Galaxy S6 Edge bends as much iPhone 6 Plus - with which the bendgate originally started. The approximately 2-minute video also shows HTC's new flagship put through a bend test.

Defending the product, Samsung on Monday posted its own 3-point bend test video showcasing that both the Galaxy S6 and Galaxy S6 Edge can handle pressure of up to 79lbf (pound force, which translates to 35.8 kgf or kilogram force) without bending, more than the pressure an average human could exert when sitting on the phone in their back pocket, and even shows that both the panels (front and rear) were subjected to the test.

Pointing out to SquareTrade that both panels need to be tested, a tweet by Samsung Tomorrow also noted, "When you #bendtest, it is important that you check both front AND back GalaxyS6edge."

The infamous 'bendgate' issue hearkens back to the launch of the iPhone 6 Plus. It started when users started complaining that the phone was bending in their pockets while sitting. Soon after YouTube videos thrived, showing other flagships put under similar bend tests to see whether they will bend similar to iPhone 6 Plus. At that point, Samsung and numerous other manufacturers took pot shots at Apple with viral memes. Apple later defended the build quality and testing method of both the iPhone 6 and iPhone 6 Plus, taking media on a tour of its testing facility.

Apple CEO Says Employees Can Buy Apple Watch at Half the Price: Report
Lenovo Says A6000 Smartphone Not Discontinued in India