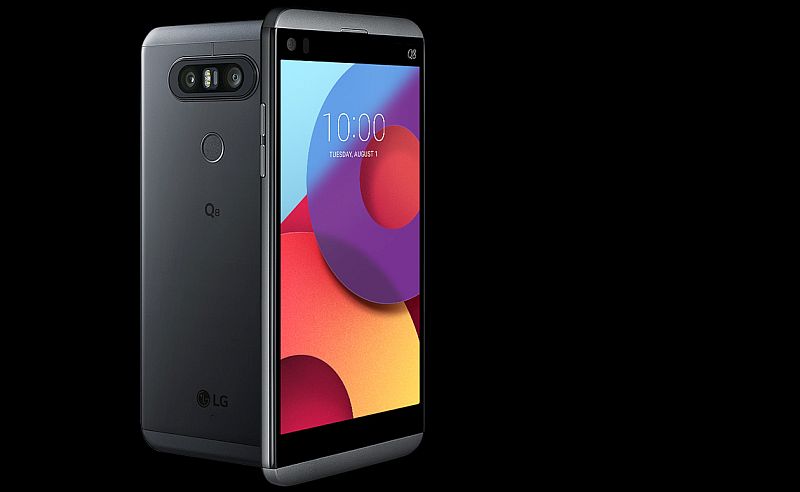 LG, shortly after introducing the new Q-series smartphones, has now unveiled the Q8. The all-new LG smartphone has been launched in Italy. Unfortunately, there's no word when the LG Q8 will go on sale and the price tag it will sport. Additionally, there's no word whether the smartphone will be made available outside Italy or if it will be rebranded for the international market.

The all-new LG Q8 for all means and purposes is a mini variant of the LG V20 with a smaller screen. One of the highlights of the LG Q8 is it sports a secondary screen.

The LG Q8 features a 5.2-inch QHD (1440x2560 pixels) IPS LCD display with Corning Gorilla Glass 4 protection. It sports a pixel density of 554ppi. There's also an "always-on" secondary display with a screen resolution of 160x1040 pixels. It runs on the company's LG UX 5.0 based on Android 7.0 Nougat. To recall, the LG V20 was the first phone to ship with Android 7.0 Nougat out-of-the-box last year.

Under the hood, the phone is powered by a Qualcomm Snapdragon 820 SoC coupled with 4GB of LPDDR4 RAM. There's 32GB inbuilt storage that's expandable via microSD card.

The LG Q8 sports a dual camera setup at the back with a 13-megapixel sensor with f/1.8 aperture and an 8-megapixel sensor with f/2.4 aperture. There's also a 5-megapixel front camera with f/1.9 aperture. The phone is backed by a 3000mAh battery. Connectivity options include Wi-Fi 802.11a/b/g/n/ac dual-band, Bluetooth v4.2, and USB Type-C. LG Q8 comes with IP67 certification making it water resistant up to 1.5 metres for 30 minutes. There's a fingerprint sensor at the back placed just below the dual camera setup. The phone also packs an infrared emitter. Much like other LG high-end devices, the LG Q8 also comes with 32-bit quad DAC support. It measures 149x71.9x8mm and weighs 146 grams.