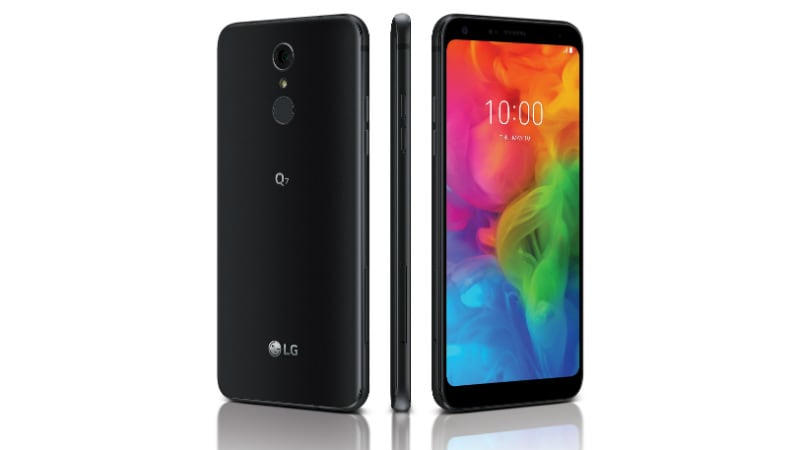 South Korean manufacturer LG on Wednesday revealed the official domestic pricing for its LG Q7 and Q7+ mid-range smartphones launched last month. Made available in Aurora Black and Lavender Violet colour variants, the LG Q7 has been priced at KRW 495,000 (roughly Rs. 30,900) and the Q7+ has received a price tag of KRW 570,000 (roughly Rs. 35,600). The phones will be available in South Korea across three major mobile carriers. The mid-range handset is expected to arrive in markets including Europe, Asia, Latin America, and Middle East Africa in the coming months, starting off with the LG Q7 in "early June" in Europe. Pricing for the LG Q7a (aka LG G7 Alpha) model was not revealed.

The LG Q7 and Q7+ both run Android 8.0 Oreo, and sport the same 5.5-inch full-HD+ (1080x2160 pixels) FullVision display with an 18:9 aspect ratio and a pixel density of 442ppi. The phones are powered by a Qualcomm Snapdragon 450 14nm SoC, coupled with an Adreno 506 GPU. The two variants differ in terms of the amount of RAM and storage. The LG Q7 gets 3GB of RAM and 32GB of storage, while the LG Q7+ is equipped with 4GB of RAM and 64GB of internal storage. Storage is expandable on both via microSD card (up to 2TB).

In terms of optics, the LG Q7 gets a single 13-megapixel rear camera sensor and the LG Q7+ comes with a single 16-megapixel rear sensor, both with a PDAF lens. On the front, the variants are expected to arrive with a 5-megapixel selfie camera with 100-degree lens. There is a 3000mAh battery under the hood.