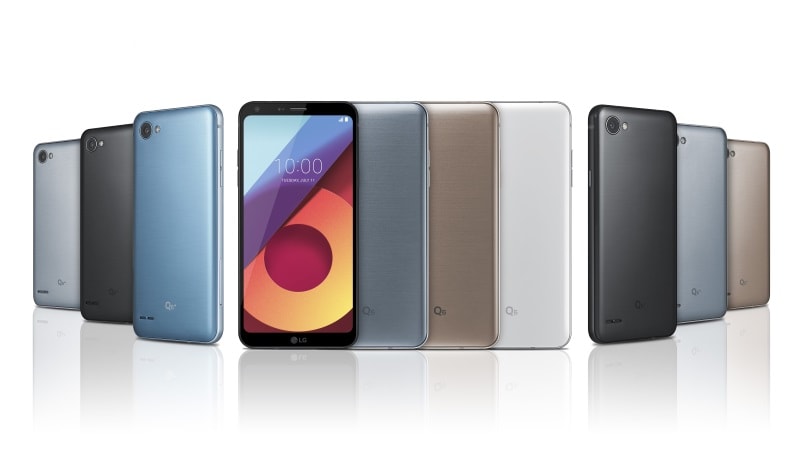 While we expected LG Q6 to launch at an event in Poland, the LG on Tuesday went ahead and unveiled three new smartphones LG Q6, LG Q6+, and LG Q6a. The company says that its Q series offers some of the most sought premium features at a competitive price. As these are all variations of the same smartphone, all three models come with the company's FullVision display, which was introduced with LG G6, and features a taller-than-usual aspect ratio of 18:9.

Despite mentioning the "competitive pricing" part, LG hasn't announced the pricing for the new handsets but says that the LG Q6 and it's variants will go on sale in key markets in Asia starting next month. This will be followed by availability in Europe, Latin America, and North America.

Notably, the LG Q6+, LG Q6, and LG Q6a feature exact same design, similar to the LG G6, and will all be made available in Astro Black and Ice Platinum colours. LG Q6+ will additionally be offered in Marine Blue colour while the Q6 will come in Terra Gold and Mystic White colours as well. The LG Q6a will be available in Terra Gold colour variant too. Other differences are in terms of RAM and inbuilt storage.

Coming to the specifications, the LG Q6+, LG Q6, and LG Q6a run Android 7.1.1 Nougat out-of-the-box and sport a 5.5-inch FullVision display with a screen resolution of 1080x2160 pixels. The smartphones are all powered by a Snapdragon 435 processor. However, in terms of memory, the LG Q6+ comes with 4GB of RAM, the Q6 packs 3GB of RAM, and the Q6a features 2GB of RAM.

In terms of optics, all three models come with a 13-megapixel single rear camera, unlike the dual camera setup on the LG G6. At front, the smartphones feature a 5-megapixel camera with wide-angle lens. Moving to the storage, the LG Q6+ has a built-in storage of 64GB while the Q6 and Q6a come with inbuilt storage of 32GB and 16GB respectively.

"The LG Q6 is a blend of premium features, great performance and attractive pricing, a combination that is extremely important to us as we look at the way consumers are using smartphones around the world," Juno Cho, president of LG Electronics Mobile Communications Company, was quoted as saying in the company's release.