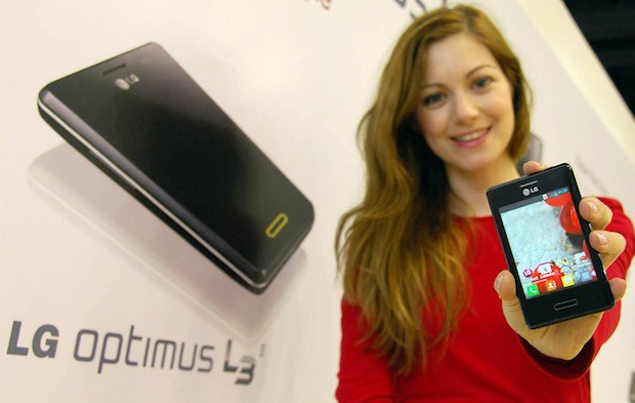 LG recently launched the successor to its Optimus L-series of devices in the form of the L3 II, L5 II and L7 II.The devices were then showcased at the MWC floor and after the L7 II recently went on sale in Russia, it's time for the L3 II to say hello to the world this week.

The Optimus L3 II will begin gradually rolling out this week and Brazil will be the first country to witness the device's availability. This will be followed by single and dual-SIM models being introduced in the other markets of South and Central America, Europe, Asia, Middle East and Africa.

Until now, we knew little about this device except that it sports a 3.2-inch QVGA IPS display and comes with a 1,540mAh battery. Other specs on the Optimus L3 II include a 1 GHz single core processor with 512MB RAM, 4GB of internal storage and a 3-megapixel camera.

Feature wise, the Optimus L3 II will offer QuickMemo with Overlay mode that was previously only available in LG's premium smartphones. QuickMemo with Overlay mode allows users to jot notes on a transparent "layer" while still being able to view another screen in the background. This eliminates the need to split the screen and allows both QuickMemo and the other application to be viewed in full-screen mode simultaneously.

"The Optimus L3 II is a versatile phone for the smart and stylish individual," said Dr. Jong-seok Park, president and CEO of LG Electronics Mobile Communications Company. He further added, "Its improved user experience makes this an attractive device for customers who want to express their sense of style without sacrificing functionality."

The Optimus L3 II will be available in four vibrant colour options namely indigo black, white, pink and titan. The pricing however, will be announced at a later date.

Apart from the overhauled LII series, the Korean manufacturer also introduced the Optimus F7 and the F5 4G LTE smartphones as part of a new F series. The Korean smartphone maker has so far not announced the pricing for these smartphones. However, it has indicated that the worldwide rollout of the Optimus F5 will begin in the second quarter in Europe, and will be followed by Optimus F7 in selected markets.