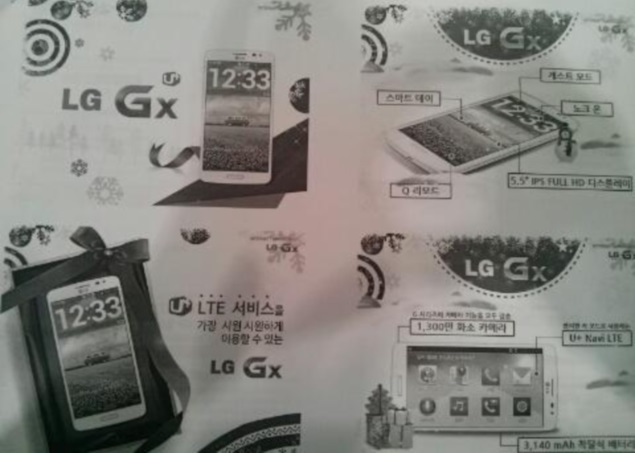 According to a report, LG is working on its next G series smartphone, believed to be dubbed LG Gx, which is looks to a be phablet that is lower-specced than the company's current flagship, the LG G2.

A Korean publication has posted purported specifications of the alleged LG Gx smartphone, which were first spotted by Phonearena.

As per the Korean site, the alleged LG Gx will come with a 5.5-inch display, however, there is no word on the display technology or screen resolution. The Gx will supposedly be powered by a Snapdragon 600 processor, coupled with 2GB of RAM. While the report says the Gx will include 32GB inbuilt storage, it makes no mention of expandable storage options.

The rumoured LG Gx is also said to sport a 13-megapixel rear camera, and pack a 3140mAh battery. The site also claims that the alleged LG Gx would support LTE connectivity. The site has also posted an image of a poster that appears like a marketing material of the alleged LG Gx. The image in the poster shows a phone believed to be the LG Gx and it clearly reveals a front physical home button in the device. As of now, there is no word on the availability and pricing of the alleged LG Gx.

LG is also rumoured to be working on a mini-variant of its 2013 flagship smartphone, the LG G2, dubbed G2 mini.

Recently, a report emerging from Korea suggested that sales of LG's flagship smartphone, the G2, have been below expectations. As per the report, LG sold around 600,000 units of G2 in South Korea since the launch; and about 2.3 million units internationally, while the South Korean had set a sales target of 3 million for the G2 globally.