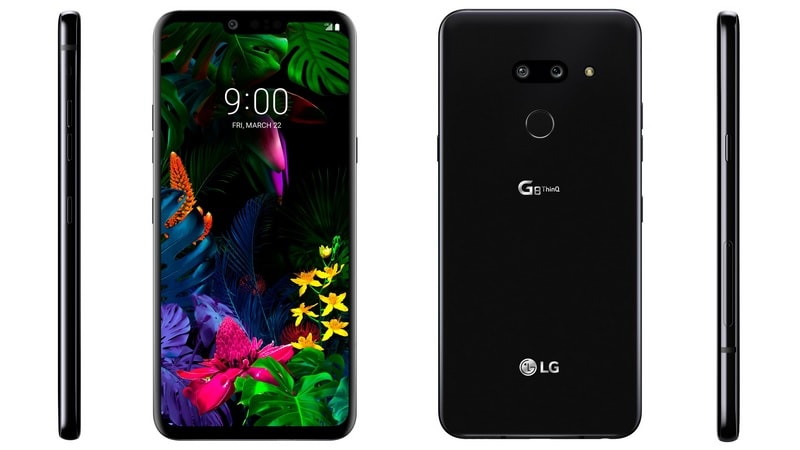 LG's upcoming flagship, the LG G8 ThinQ has been leaked in the form of renders multiple times in the past and some of its key specifications have surfaced too. Now, a new set of high-quality images have made their way online that give us a clear look at the LG G8 ThinQ's design from all angles. The leaked photos seemingly confirm some previous rumours regarding the upcoming high-end smartphone such as a dual rear camera setup, a dedicated Google Assistant button as well as a wide notch.

The fresh LG G8 ThinQ leak comes courtesy of Evan Blass (aka @evleaks), who has a pretty solid reputation when it comes to smartphone leaks. The prolific tipster tweeted the images of the upcoming smartphone and captioned it “LG G8 ThinQ”, eliminating any doubts regarding the identity of the smartphone. However, there is no mention of any hardware specification or features associated with LG's upcoming offering. The images show the LG G8 ThinQ sporting a black paintjob with what appears to be a metallic frame running around the edges.

The freshly leaked LG G8 ThinQ images are nearly identical to another set of photos that showcased the smartphone flaunting a grey finish but the same build, down to the placement of the camera module, buttons and the fingerprint sensors. Moreover, alleged renders of the device that were leaked last month revealed a similar design but with a glossy blue surface finish and also indicated that the LG smartphone will retain the 3.5mm headphone jack.

As for the hardware under the hood, the South Korean company has officially confirmed that the LG G8 ThinQ will feature a ToF (Time-of-Flight) technology-backed front camera for more accurate 3D facial recognition and better depth estimation for bokeh effects. As per another leak, the LG flagship will reportedly come equipped with a 3,400mAh battery, but there is no word on support for fast charging. Other rumoured specifications include a 6.1-inch display with 19.5:9 aspect ratio and Qualcomm Snapdragon 855 SoC powering the device. As for the launch, LG is expected to unveil the LG G8 ThinQ alongside the LG V50 ThinQ 5G at an event scheduled for February 24, 2019 in Barcelona ahead of MWC 2019.