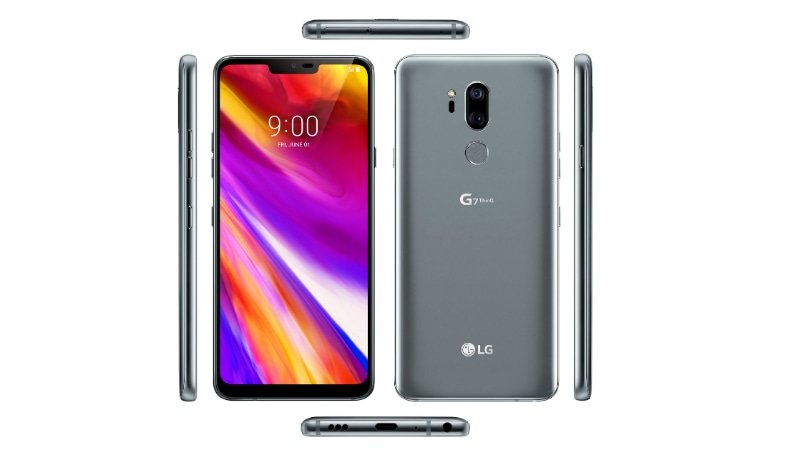 LG G7 ThinQ is all set to be the South Korean giant's flagship offering once it's announced at a launch event scheduled for May 2 in New York and, subsequently, in Seoul on May 3. In its latest set of leaks, the LG G7 ThinQ has been revealed online in its entirety. The new renders show the presence of a display notch, a bottom chin, and, fortunately, a 3.5mm headphone jack. Separately, two variants of the LG G7 have reportedly undergone certification in their home country.

Reputed tipster Evan Blass has, once again, taken to Twitter to reveal high-quality press renders of a new smartphone; this time, the LG G7 ThinQ. The handset is seen in a Gray colour variant and the images show it from all angles. Front of the smartphone has an edge-to-edge display with a notch and a substantially-sized bottom bezel. Back of the phone sports a vertical dual rear camera setup with LED flash and Laser Autofocus, a rear-mounted fingerprint sensor, and "G7 ThinQ" branding.

The right of the smartphone gets a lock/ power key, and the left side sports volume controls and an additional button that could be used to trigger a virtual assistant - possibly, Google Assistant. Bottom of the handset gets a 3.5mm jack, a USB Type-C port, a speaker grille, and antenna bands. And, on top is the SIM tray.

Identified with model numbers LM-G710V and LM-G710N, two variants supposedly of the LG G7 have been spotted on National Radio Research Agency's certification portal in South Korea. Spotted by Dutch media outlet LetsGoDigital, the LM-G710N variant is expected to be exclusive to South Korea while the 'V' variant might be made available in international markets.

As per previous rumours, the smartphone is expected to sport an M+ LCD display, two 16-megapixel camera sensors on the back, and a Qualcomm Snapdragon 845 SoC. From what LG has been teasing for the past weeks, the LG G7 ThinQ will be high on AI quotient.