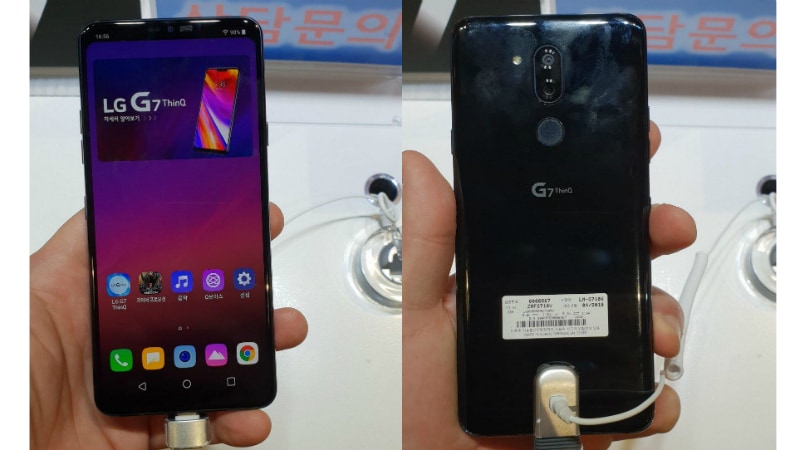 LG G7 ThinQ hands-on images have surfaced just ahead of its May 2 launch that is happening in New York. The leaked images showcase the design of the upcoming LG flagship that we previously saw in some press renders. Also, the images show how the new smartphone will be different from its predecessor, at least in terms of the looks and build. The smartphone is already teased to come with a 'Boombox Speaker' and sport a 'second screen' that may hide its iPhone X-like notch. It is also rumoured to debut with a dedicated Google Assistant button to take on the Galaxy S9 family that has a physical Bixby button.

The leaked images, which have been posted on SlashLeaks, show that the LG G7 ThinQ has a hideable notch that apparently includes a front-facing camera, earpiece, and a couple of sensors, including an ambient sensor and a proximity sensor. The smartphone also has a chin at the bottom - just below the on-screen buttons - that isn't as big as the one featured on the LG G6 last year. Further, there are thin bezels on the left and right to support the display panel that is likely to have an aspect ratio of more than 16:9 - particularly a 19.5:9 aspect ratio.

The back of the LG G7 ThinQ, as per one of the leaked images, has a vertically placed dual camera setup and a fingerprint sensor. It appears that similar to the front, the back of the G7 ThinQ also has a glass panel that easily catches fingerprints. Besides, there is a logo stating that the handset is none other than the G7 ThinQ.

If we look at some of the previous reports, the LG G7 ThinQ is expected to come with a 6.1-inch QHD+ (1440x3120 pixels) LCD panel that will deliver 1,000 nits of brightness. The handset is also reported to be powered by a Qualcomm Snapdragon 845 SoC, coupled with 4GB of RAM. It could also support wireless charging and is likely to come with a 3.5mm headphone jack that will support a DTS:X 3D Surround Sound technology.

We need to wait until May 2 to see what LG is offering with its G7 ThinQ flagship. But in the meantime, you can expect some more reports revealing secrets of the next-generation LG flagship.