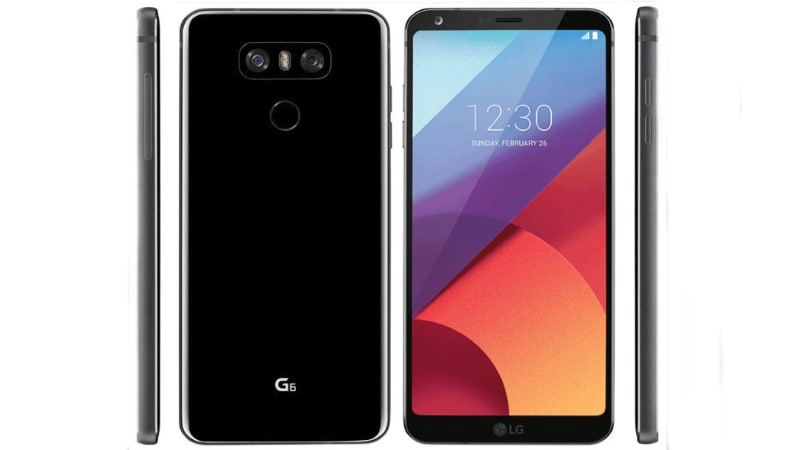 LG's upcoming flagship has been subjected to many leaks and teasers, and today is no different. The LG G6 is set to launch at MWC 2017 at the company's Sunday event, and the device's first official render has now been leaked showing us a full-blown look of the device from all angles. Furthermore, a separate image leak shows how different the LG G6 is when sitting beside the LG G5. Lastly, a new teaser is out and LG this time boasts of the tweaked camera UI especially the square capture mode that is going to be introduced on the LG G6.

Prolific tipster @evleaks has shared a press render of the LG G6 confirming all previous rumours. The device has an almost bezel-less front with no Home Button seen anywhere. The fingerprint scanner is situated at the back, right below the dual camera setup. The back has a glossy black finish, and appears to be all-glass, appearing set to take on the iPhone 7's Jet Black colour variant. The antenna band is seen on the metal edges with the volume buttons housed on the right edge. Another image leaked on Weibo (first spotted by TechTastic) shows a similar looking LG G6 sitting beside the predecessor LG G5. It shows how much more real estate the display gets, in the same form factor as the LG G5. This means that the LG G6, even with its rumoured 5.7-inch display, is of the same size as the G5. Just to compare, the LG G5 just had a 5.3-inch panel.

LG has been rolling out many teasers running up to the launch, and the fresh one hints at a very useful feature coming with the LG G6 camera. The company is expected to overhaul the Camera UI, and one of the big highlight is the square capture mode. This mode allows you to reduce the viewfinder display to a square, and because of the extra display real estate, the preview will be shown right below on the same screen. The Camera UI will take advantage of the 2:1 aspect ratio and show you the camera view and the photo preview on the same screen, eliminating the need to go to a separate window to see the clicked picture. The square capture mode is essentially useful for social media posts like setting a WhatsApp or Facebook profile picture without cutting out composition. Instagram also accepted only square pictures first, but now accepts all aspects.

The LG G6 smartphone is set to launch on February 26 in Barcelona, and it is tipped to be the first non-Pixel smartphone to come with Google Assistant integration.