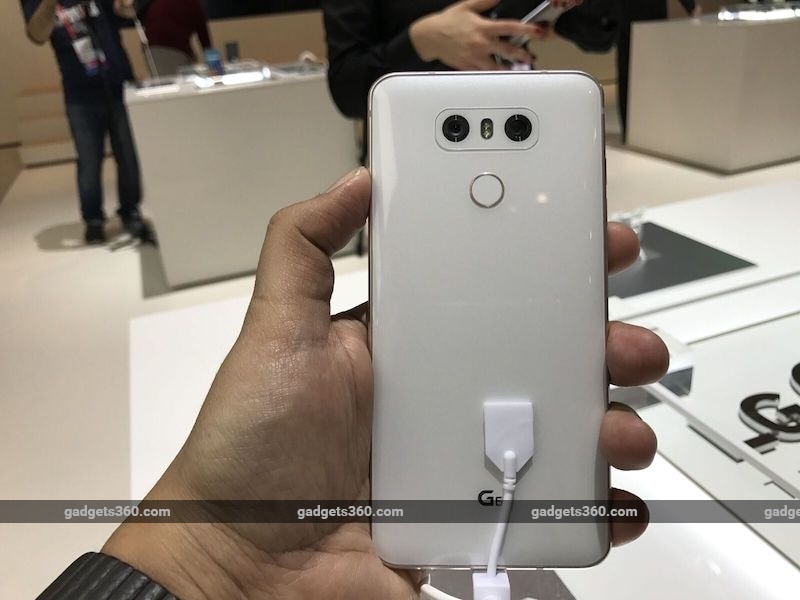 The LG G6 flagship smartphone has been launched in India, bringing a rival to the new Samsung Galaxy S8 within days of its arrival in the country. The new LG G6 smartphone will be available exclusively on Amazon India for online sales, and can also be purchased from offline stores starting Tuesday, April 25. As for pre-orders, the smartphone has been up for advanced bookings since the past few days. Those who had pre-ordered LG G6 will get cashback of up to Rs. 7,000 and a discount on LG Tone Active+ HBS-A100 wireless headset. There are launch offers for those who purchase the smartphone via Amazon India as well.

The LG G6 price in India is Rs. 51,990 (MOP), which makes it significantly cheaper than the flagship of rival South Korean company, Samsung. To recall, the Samsung Galaxy S8 was launched in India starting at Rs. 57,900. Notably though, the specifications of the two smartphones are not comparable for one major reason - the LG G6 runs on the 14nm Qualcomm Snapdragon 821 SoC, an year-old offering, compared with the Samsung Galaxy S8 and its 10nm Qualcomm Snapdragon 835 SoC (or 10nm Samsung Exynos 8895 SoC). It will be available in Astro Black and Ice Platinum colour variants in India.

LG G6 launch offer on Amazon India is Rs. 10,000 cashback for HDFC and SBI credit card holders, applicable only on Tuesday, April 25. Separately, the company is offering 50 percent off on the LG Tone Active+ HBS-A100 wireless headset. The discount on the LG headset is valid till May 31. The company has also detailed a Reliance Jio offer, where LG G6 users will get additional 10GB on every recharge of Rs. 309, translating to an additional 100GB until March 2018.

Separately, as we mentioned, the LG G6 has already gone up for pre-orders in India. The company is offering cashbacks up to Rs. 7,000. To be specific, the Rs. 7,000 cashback being offered is only valid till May 1, and includes a Rs. 2,000 cashback for LG G6 pre-bookings, and a separate cashback of Rs. 5,000 that is valid till May 31. Both cashbacks are only for SBI and HDFC Bank card holders.

You can pre-book through the LG website and via offline retailers. LG is also giving away "EA special gifts" for 6 mobile games including Cookie Jam, Temple Run 2, and Spider-Man Unlimited among others, worth Rs. 14,100.

The LG G6, which features a metal body and glass (Corning Gorilla Glass 5) backing, was unveiled at MWC 2017 and runs Android 7.0 Nougat out-of-the-box with the LG UX 6.0 skin atop. LG G6 specifications include a 5.7-inch QHD+ (1440x2880 pixels) FullVision display with a near bezel-less front, an 18:9 (or 2:1) aspect ratio, DolbyVision HDR certification, and Corning Gorilla Glass 3. Powering the smartphone is an octa-core Qualcomm Snapdragon 821 SoC (four cores at 1.6GHz and four cores at 2.1GHz) coupled with 4GB of LPDDR4 RAM. While LG G6 unveiled at MWC came in 32GB and 64GB storage options, with support for expandability via microSD card (up to 2TB), LG has only brought the 64GB storage variant to India.

The G6 sports a dual-camera setup on the back with two 13-megapixel sensors - one for wide-angle shots with 125-degree lens and an f/2.4 aperture, and the other for regular shots with 71-degree lens, an f/1.8 aperture. It features OIS 2.0 (optical image stabilisation), EIS (electronic image stabilisation), and PDAF (phase detection autofocus). Also being touted are Square Camera mode (for your social profile photos), multi-view (combining both front and rear camera views), and Hi-Fi Video Recording. Over at the front you get a 5-megapixel wide-angle lens with an f/2.2 aperture and 100-degree lens.

Additionally, the LG G6 features a 32-bit Hi-Fi Quad DAC (digital to analogue converter) for enhanced audio playback, apart from an Hi-Fi Audio Recorder. It has also passed the MIL-STD 810G military standard certification for durability. It bears an IP68 rating for dust and water resistance, just like the Samsung Galaxy S8. It bears a fingerprint sensor on the rear panel. Also being boasted of is Google Assistant support.

Microsoft Tipped to Take on Chromebooks at May 2 Event
uTorrent Will Soon Be Available in Your Web Browser, Says BitTorrent Founder