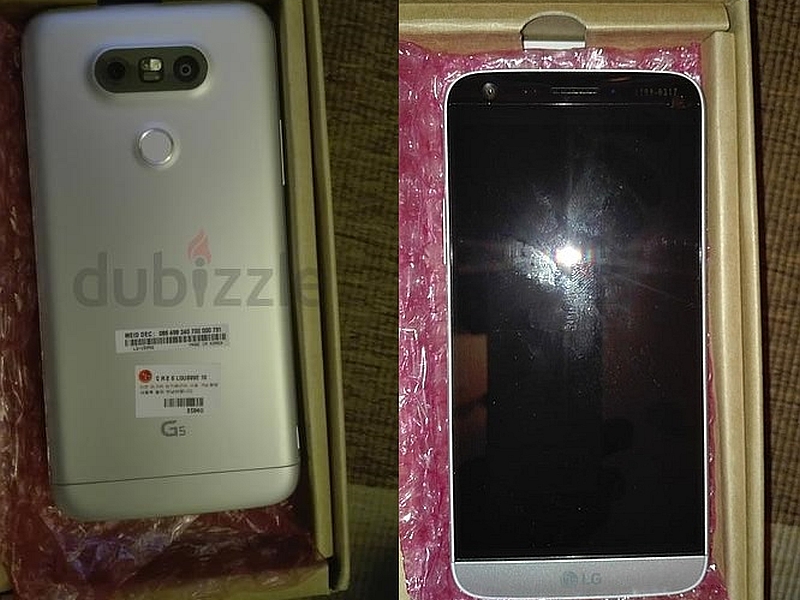 A user is apparently trying to sell the alleged LG G5 before its actual launch in Dubai via an e-commerce website called Dubizzle. The seller has also uploaded three images showing the smartphone's front and back panel. The post adds that the handset comes with a valid IMEI and is in its original packing. The G5 is listed with a price tag of AED 2,500 (roughly Rs. 46,500).

The images (seen above) and the handset they show still however remain questionable. The LG G5 in the images seems to sport an all-metal body like rumoured before. Interestingly, the back panel now has a different layout. A dual-camera setup is seen positioned horizontally, with LED flash and other sensors placed in between. A fingerprint sensor is also positioned right below the camera setup. At the bottom, the 'G5' logo is clearly visible.

At the front, the LG G5 is seen sporting a greater screen-to-body ratio than before. The front-facing camera along with the speaker grille is visible on top, while the company logo is placed at the bottom.

Tipster Evan Blass (aka @evleaks) also posted on Twitter that he's seen the LG G5 smartphone and can confirm the inclusion of a secondary display. Although the details of the secondary display are scarce at the moment, it is likely to feature the same ticker display we saw in the LG V10 handset. The ticker display was however, not recognisable in the aforementioned image leaks. Additionally, Blass confirms that the handset will house the same wide-angle dual-lens camera setup, which was seen in the images posted by the seller we mentioned above. He adds that the same setup is present with the LG X cam smartphone, which has been launched ahead of MWC 2016.

It is being assumed that such camera setup can house features such as object removal from picture, extra zoom-in functionality, and more.

A separate report suggests the existence of a 'Lite' version of the LG G5, with the smartphone reportedly passing the GFXBench benchmarking website. Codenamed LG H840, the smartphone as per the results will be running Android 6.0.1 Marshmallow and will feature a 5.3-inch QHD display. Powered by an octa-core Qualcomm processor clocked at 1.8GHz, the LG G5 Lite will house 3GB of RAM along with Adreno 510 GPU. Other features included are 32GB inbuilt storage, and a 7-megapixel rear and front-facing camera. The LG G5 is set to be launched at the company's pre-MWC 2016 keynote event on February 21.