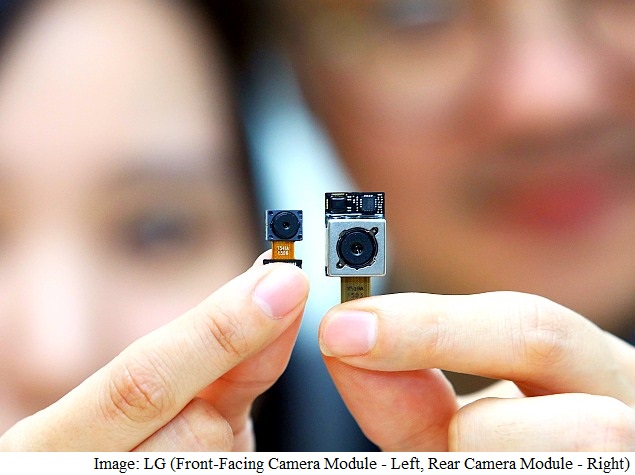 Seems like LG is eager to showcase its the G4 flagship smartphone to the world ahead of its launch on April 28. The company has released numerous teasers and statements, and thus far had confirmed a 5.5-inch QHD IPS display, the presence of LG UX 4.0, and a rear f/1.8 aperture camera, besides tipping laser autofocus and LED flash. On Thursday however, the firm's components and materials division LG Innotek revealed the resolution of both the front and back camera modules on the LG G4.

While the firm in its previous teaser video as well as countdown clock just mentioned the f/1.8 aperture for the rear camera of the LG G4, it now has revealed that the rear shooter will include a 16-megapixel sensor. This would match it closely with the Samsung Galaxy S6 and Galaxy S6 Edge, which both feature 16-megapixel rear cameras with a f/1.9 aperture. As per the announcement, LG's Innotek plant has started mass-producing the module this week.

As for the front-facing camera module, the LG G4 will house an 8-megapixel sensor "in response to the explosive growth of selfies." LG says that its 8-megapixel camera module is the company's highest resolution front-facing shooter to date. The camera's "ultra-thin" IR module (0.11mm) will supposedly prevent any infrared light from entering the camera, giving the image more accurate colours.

"At LG Innotek, we are constantly working to ensure that the cameras we develop allow users to capture and preserve the moments that are most special to them," said Ung-beom Lee, CEO of LG Innotek during the announcement. "We are extremely excited to see our technology in LG's next flagship smartphone because we believe that the power, precision and operability of our camera module will clearly make an impression on consumers."

As we mentioned, LG has till date confirmed a bunch of specifications for its upcoming G4 smartphone. The handset will feature a 5.5-inch QHD (1440x1560 pixels) resolution IPS display with a pixel density of 535ppi; LG UX 4.0 with new features, and now a 16-megapixel rear camera with an f/1.8 aperture; LED flash and laser autofocus, and an 8-megapixel front-facing camera.