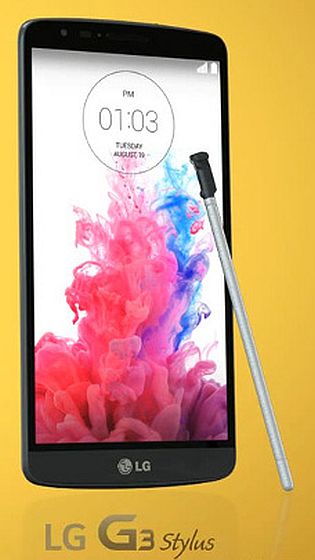 LG seems all set to introduce the phablet variant of its flagship G3 smartphone soon, with a large-screen device called the LG G3 Stylus being spotted in an official promo video on Wednesday. Now, new reports indicate a Q3 launch for the anticipated phablet, and also provide purported specifications from an alleged UA profile listing and an import/ export site.

While the South Korean giant has provided no details on the unannounced LG G3 Stylus' specifications, an alleged user agent profile with model number D690n, as well as an import/ export site listing with the same model number (both spotted by Eyeonmobility), indicate the handset will be a mid-tier offering.

As per the two alleged listings of the D690n smartphone, thought to be the LG G3 Stylus, it will sport a 5.7-inch HD (720x1280 pixels) display and run Android 4.4 KitKat out-of-the-box. The 4G-LTE supporting smartphone is seen to be powered by a 1.3GHz quad-core processor (unspecified) coupled with 1GB of RAM.

Other specifications listed for D690n purported to be the LG G3 Stylus include an 8-megapixel rear camera, a 1.3-megapixel front-facing camera, and 8GB of inbuilt storage.

Another report in the meanwhile claims the unannounced LG G3 Stylus will launch in Q3, and will include a 'pen-pushing' stylus that's 5.5-inches in height. "The Stylus will be the pen-pushing model with a screen size of about 5.5 inches," stated an official familiar with the matter to Korea Times

However, since none of the aforementioned specifications have been confirmed by LG, the final product might arrive with some changes.

LG on Thursday launched the G3 A for South Korea. The LG G3 A supports Korea's LTE-A band, similar to the recently launched Samsung Galaxy S5 LTE-A and LG G3 Cat.6. The latter is identical to the G3, except that it features a Snapdragon 805 SoC instead.