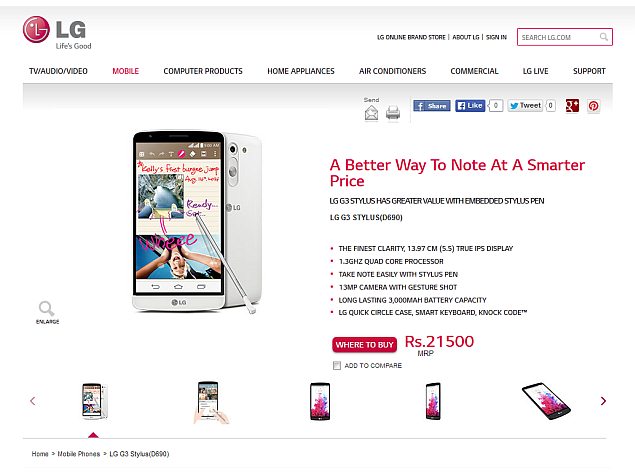 LG's recently launched G3 variant, the LG G3 Stylus, has now been listed on the company's India site at Rs. 21,500. There are no details on market availability, and LG is yet to officially launch the smartphone in India.

The company had confirmed the global roll-out of LG G3 Stylus in September, starting Brazil and then followed by other markets in Latin America, Central Asia and the Commonwealth of Independent States (CIS).

Initially announced in August ahead of IFA, the highlight feature of the G3 Stylus is that it comes with a 'Rubberdium' stylus, a feature that is missing from the LG G3 (Review | Pictures) flagship.

The LG G3 Stylus features a 5.5-inch qHD (540x960 pixels) display and is powered by a 1.3GHz quad-core (unspecified chipset) processor, coupled with 1GB of RAM. It comes with 8GB of inbuilt storage and supports expandable storage.

The smartphone sports a 13-megapixel rear camera and also comes with a 1.3-megapixel font camera. The LG G3 Stylus is backed by a 3000mAh removable battery. It measures 149.3x75.9x10.2mm and weighs 163 grams. The G3 Stylus was launched in Black, Gold and White colour variants.