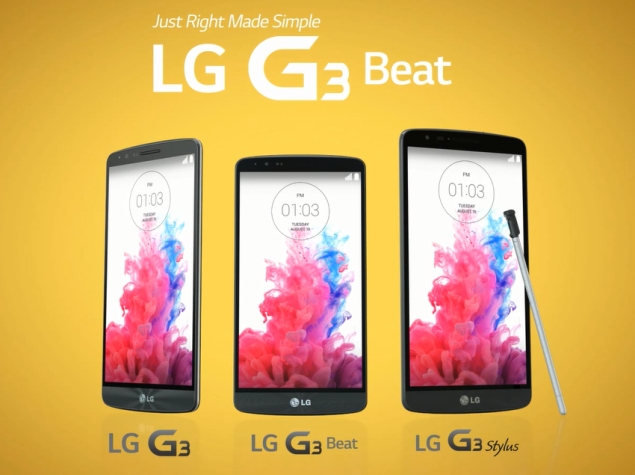 The unannounced LG G3 Stylus has briefly appeared in an official promotional video by LG for the recently launched G3 Beat.

As seen in the video, the LG G3 Stylus (on right) appears taller than the LG's latest flagship G3 (left) which has a 5.5-inch display, and LG G3 Beat (centre) with its 5-inch display. The G3 Stylus smartphone is rumoured to feature a 5.9-inch display, like the LG G Pro2, while there are no other details known as of now.

The LG G3 Stylus seems to be the same handset that was previously leaked by famous tipster @evleaks in May, at that time thought to be the LG G3. The leaked image had showcased the top of the smartphone with a possible stylus, apart from showing a rear button interface and a large, thin-bezel display. Of course, the LG G3 didn't include any stylus when it was launched later that month.

As yet there is no official information on the LG G3 Stylus, the South Korean giant may very well make such a device to compete with Samsung's next Note phablet flagship, which is rumoured to launch on September 3, in Berlin. Samsung has reportedly started sending out invites a pre-IFA 2014 launch event where the Galaxy Note 4 is expected to be launched.

The anticipated Galaxy Note 4 has been tipped to feature a 5.7-inch display and is likely to include a stylus just like the previous variants of Galaxy Note series.
Comments