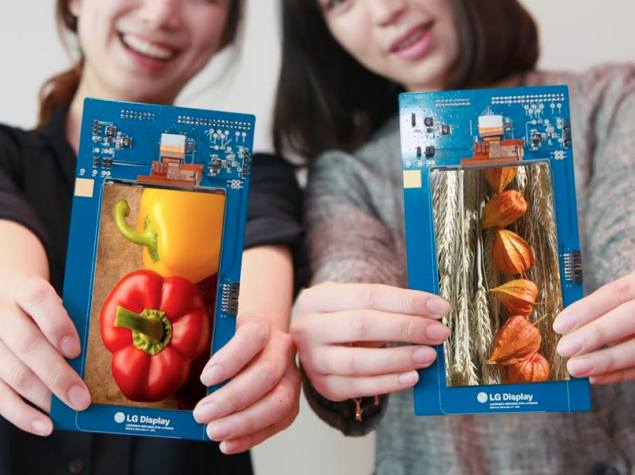 While LG had confirmed that it will be using a QHD display on the LG G3, its 2014 flagship smartphone, the screen size (though rumoured at 5.5-inches) had not yet been officially confirmed. LG has now gone ahead and made it all official, by unveiling a NEMKO-certified 5.5-inch QHD AH-IPS LCD panel for smartphones, as well as announcing its inclusion on the 'forthcoming LG's flagship smartphone to be launched in the first half of the year.'

The certified 5.5-inch QHD AH-IPS LCD panel has a 1440x2560 pixel resolution with a pixel density of 538ppi. According to LG, it has 1.8 times higher resolution than a full-HD panel and a 100 percent RGB colour reproduction standard.

"This is an ultra-slim panel with a mere 1.2mm thickness and has a 1.15mm bezel, which will be the narrowest available and 0.05mm less than panels introduced last year" said LG in a press release.

Earlier leaks have also shown alleged LG G3 front to have very minimal bezel around the display. The company also says that the panel will go in to mass production shortly.

So far, it seems like LG is planning big things for its next flagship. If the rumours come true, than LG G3 might be the first smartphone from a major manufacturer to feature Qualcomm's latest Snapdragon 805 SoC.

Even excluding the significantly faster Snapdragon 805 chipset, Samsung and HTC have a lot of catching up to do with LG with its official 5.5-inch QHD panel. Both the Samsung Galaxy S5 (Review | Pictures) and the HTC One (M8) (Review | Pictures) sport full-HD displays only. Numerous leaks have 'Prime' versions of the two handsets set for a launch alongside the LG G3, reportedly taking on the much better-specced 2014 flagship.

Notably, the alleged premium variant of the HTC One (M8), supposedly codenamed 'M8 Prime', is also thought to sport a Snapdragon 805 processor. Not just this, it is rumoured to feature a 5.5 inch QHD (1440x2560 pixels) display.

Samsung is not far behind as it is reportedly set to launch its Galaxy S5 Prime in June with a QHD Display to counter LG G3. It will also be interesting to see how Apple jumps into the display war with its iPhone 6.
Comments