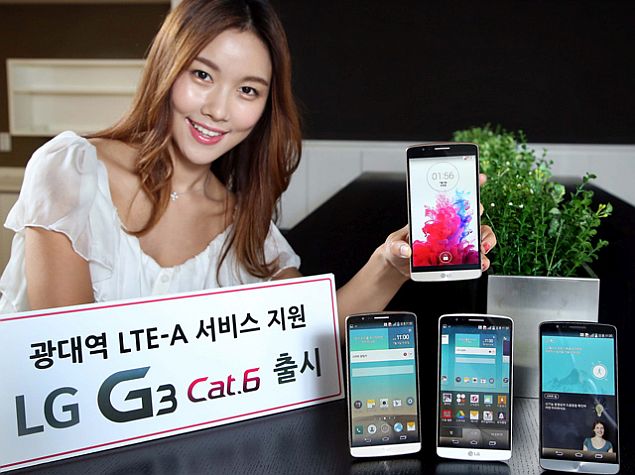 LG has finally made its LG G3 Cat.6 handset official, a smartphone that offers high download speed of up to 225Mbps, something the original flagship, the LG G3, with its Cat.4 LTE rating didn't offer.

While the pricing remains a mystery for the G3 Cat.6 smartphone, it is confirmed to hit South Korean shelves starting July 25. Earlier this month, LG teased the smartphone on its shopping portal, listing it for pre-order with a 'notify me' option.

Made official on the company's blog on Tuesday, the firm claims that the G3 Cat.6 smartphone can download a regular 1GB movie in 36.4 seconds and an 80MB music video in 2.8 seconds.

The G3 Cat.6 will arrive in Metallic Black, Silk White, and Shine Gold colour variants. Notably, the LG G3 Cat.6 (as the Snapdragon 805-bearing premium LG G3 variant previously expected to be called LG G3 Prime) comes only in a 32GB variant with 3GB of RAM, and will not be available in the 16GB with 2GB of RAM variant.

The Android KitKat 4.4.2-based LG G3 Cat.6, apart from the SoC and LTE-A modem, has the same specifications as the LG G3. It features a 5.5-inch QHD (1,440x2,560 pixel) AH-IPS LCD display. It G3 Cat.6 sports a 13-megapixel rear camera with OIS+, dual-LED flash and a laser auto-focusing sensor, while also including a front-facing 2.1-megapixel camera with f/2.0 aperture, and a selfie mode. The LG G3 Cat.6 is powered by a 3000mAh removable battery, and features wireless charging support.