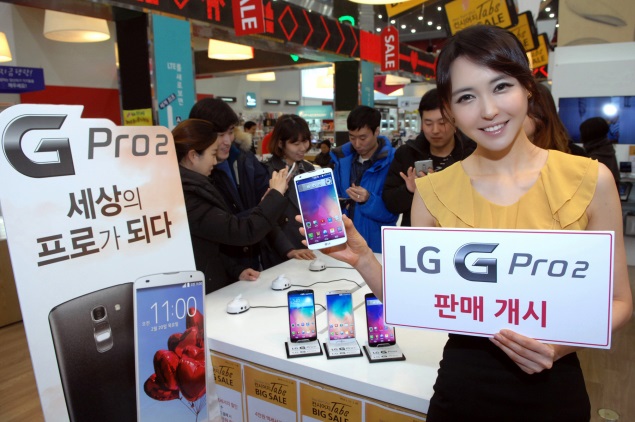 LG recently launched the much-awaited G Pro 2 smartphone without revealing the price and availability of the device. Now however, the price of the latest phablet from LG has been revealed thanks its official launch in Korea.

The G Pro 2 is listed at a price of 999,900 South Korean Won, which translates to roughly Rs. 58,000 without contract. The LG G Pro 2 is now available in Korea via the country's three major mobile carriers: SKT (SKTelecom), KTF (Korea Telecom Freetel) and LGT (LG Telecom). Notably, the South Korean electronics giant is yet to reveal details of the LG G Pro 2 release in other markets, including India.

The LG G Pro 2 runs Android 4.4 KitKat out-of-the-box. It features a 5.9-inch full-HD IPS display with a 1080x1920 pixel resolution and sports a slim bezel. A quad-core Qualcomm Snapdragon 800 processor powers the phablet, clocked at 2.26GHz with an Adreno 330 GPU and 3GB of RAM.

The G Pro 2 supports Bluetooth, Wi-Fi, GPS, AGPS, EDGE, GPRS and 3G connectivity options. It is backed by a 3,200mAh battery and will be available in Titan Black, Silver and White colour variants.

The smartphone measures 157.9x81.9x8.3mm and weighs 172 grams. The company has included a new Knock Code feature on the LG G Pro 2 which the company claims is an evolution of the KnockON feature that was first introduced in the LG G2 last year.

For WhatsApp, keeping things simple is both a draw and a handicap
Microsoft needs to move faster in terms of innovation: CEO Nadella