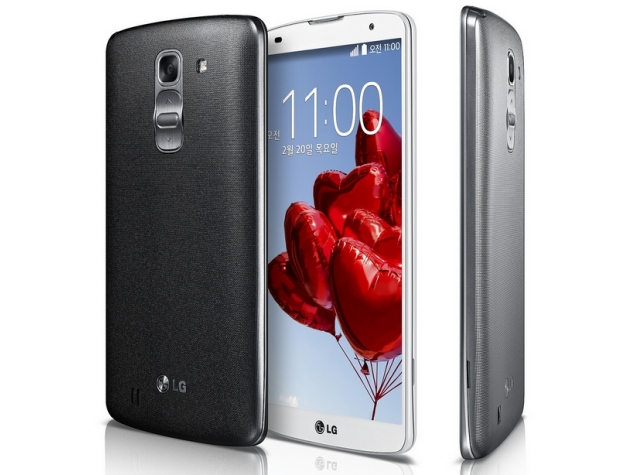 South Korea's LG Electronics unveiled a revamped version of its large-screen smartphone G Pro on Thursday, hoping it will help propel the company to the No. 3 spot in global smartphone sales this year.

LG Electronics, currently ranked No. 4, is seeking to move past Huawei Technologies Co Ltd as well as Lenovo Group which recently agreed to buy Google Inc's Motorola handset division for $2.9 billion. The deal, if approved by regulators, would catapult Lenovo from No. 5 to No. 3 - a threat that LG Electronics executives shrugged off.

"The Lenovo-Motorola deal has created a great media buzz, but this has not been much talked about within our company," Andy Kim, head of mobile product planning at LG Electronics, told a news conference.

LG Electronic's G Pro 2 comes ahead of a rival offering from market leader Samsung Electronics later this month. Apple Inc is also widely expected to launch a new iPhone with a bigger screen this year.

It boasts a 5.9-inch screen, bigger than the 5.5 inch screen of the previous model and one of the biggest on the market. It also has a 1-watt speaker system, a first for smartphones and will be powered by a Qualcomm Snapdragon 800 processor.

It also allows users to bypass the process of typing in passwords or passcodes by tapping the screens with their fingers in patterns that they choose.

Kim said that LG Electronics had decided not to go with a fingerprint scanner or iris recognition like other competitors are expected to for this function, as finger tapping is a more convenient method for users. But he added that the company is considering biometric functions for mobile payment systems.

The G Pro 2 will be on the market in Korea in late February before heading to other Asian markets, including China, where consumers prefer larger screens. The company declined to comment on plans for Western markets.

LG Electronics has improved products and sales sharply in recent years and its global smartphone sales jumped 81 percent in 2013, according to data from Strategy Analytics. Even so, heavy promotion costs for high-end models has seen its phone division post two consecutive quarters of losses.