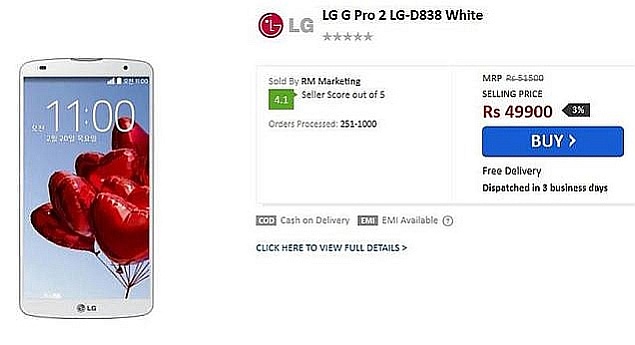 After releasing the LG G Pro 2 in select Asian markets last month, it seems LG is gearing up to launch the smartphone in India soon, as the smartphone has been listed as available at an online retailer, at price of Rs. 49,900 (MRP listed as Rs. 51,500) for the 16GB (LG D838) White variant. The phone is expected to be officially launched in India in early-May.

Earlier on Tuesday, a Mumbai-based retailer Mahesh Telecom claimed via Twitter the G Pro 2 (LG D838) will be priced at Rs. 49,900 and was due to reach stocks in few days. On Wednesday, the retailer tweeted again with an update saying that Rs. 49,900 is the MOP for the smartphone, and MRP will be Rs. 51,500, with stocks of the phone becoming available the same day.

On Wednesday, Snapdeal listed the LG G Pro 2 as available for purchase in India. The online retailer details that the phone will be dispatched in 3 business days.

The LG G Pro 2 was first announced ahead of the Mobile World Congress 2014 event, then rolled out to Korea soon after. Later in March, LG officially launched it in Asian markets like Hong Kong, Taiwan, Singapore, Philippine, Vietnam, Indonesia and others.

The LG G Pro 2 runs Android 4.4 KitKat out-of-the-box. It features a 5.9-inch full-HD IPS display with a 1080x1920 pixel resolution and sports a slim bezel. A quad-core Qualcomm Snapdragon 800 processor powers the phablet, clocked at 2.26GHz, paired with an Adreno 330 GPU and 3GB of RAM.

It sports a 13-megapixel rear camera with OIS+ (Optical Image Stabiliser Plus) and LED flash, while there is a 2.1-megapixel front-facing camera also onboard. The 5.9-inch handset comes in two storage variants: 16GB and 32GB. It does feature microSD card expandability as well, up to 64GB.