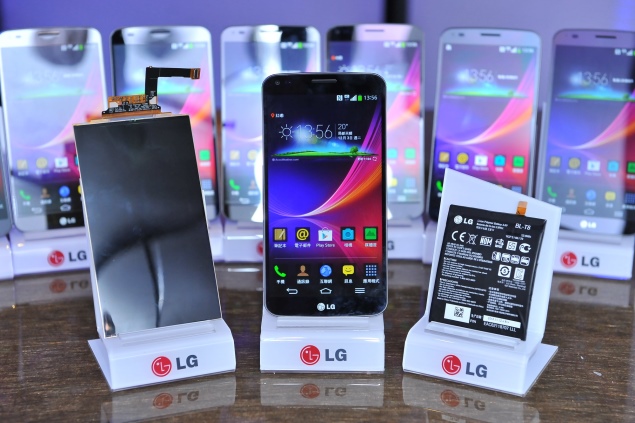 LG launched its first curved display smartphone, the G Flex in October this year with much fanfare, and it was rolled out only in South Korea initially. Now, the company has announced that the LG G Flex is ready for a global roll-out, starting with Singapore and Hong Kong this week.

As per the company, consumers in Singapore can pre-book the G Flex starting December 8, while in Hong Kong, the smartphone would be available starting December 13 through major carriers and electronics retailers.

In addition, the South Korean handset manufacturer has announced that the G Flex would be rolled out in key markets in Asia before the end of the year. There is no word yet on whether key markets include India. LG did also mention that following this phase of the G Flex roll-out, the curved display smartphone would also be made available to other regions soon.

If you haven't been keeping track of the developments, the Android 4.2.2 Jelly Bean- based LG G Flex phablet is powered by a quad-core 2.26GHz Snapdragon 800 (MSM8974) processor, an Adreno 330 GPU, and 2GB of RAM. It features a 13-megapixel rear camera, and a 2.1-megapixel rear camera. The G Flex is backed by a 3,500mAh battery, weighs 177 grams, and is 7.9mm at its thinnest, while being 8.7mm at its thickest. As for the 6-inch curved display, it comes with Plastic OLED display (P-OLED), which is supposedly ultra-light, ultra-thin and flexible.

LG announced the pricing of the G Flex for the Korean market shortly after the global launch, which translated to roughly Rs. 59,000.

Recently, a report claimed that LG has been working on a successor to the G Flex curved display smartphone, one that would sport better bendable features. The report revealed that the alleged G Flex successor, thought to be dubbed G Flex 2, would come with special hard rubber body allowing it to bend up to a 90 degree angle.