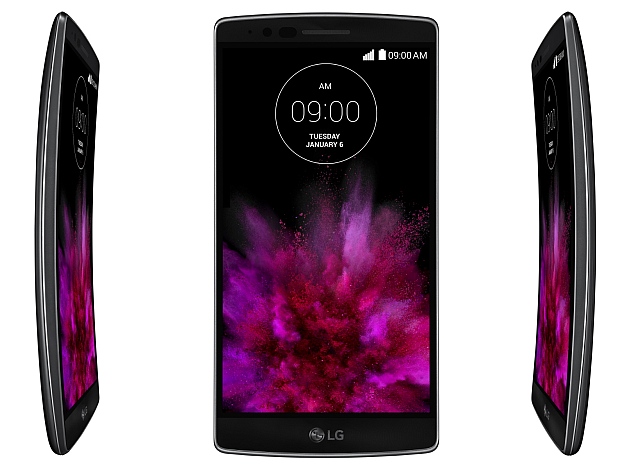 LG has launched the much-anticipated G Flex2 smartphone at CES 2015. The smartphone will be available at the end of January in Korea, and release in global markets thereafter. So far, no pricing has been revealed - though the flexible phone should cost more than the LG G3.

Most notably, the LG G Flex2 is the first announced Qualcomm Snapdragon 810 (a 64-bit octa-core SoC) smartphone. It is coupled with the Adreno 430 GPU and 2GB of LPDDR4 RAM. The single-SIM smartphone runs Android 5.0 Lollipop and features a 5.5-inch full-HD curved P-OLED display with a 1080x1920 pixels resolution and a 403ppi pixel density.

The LG G Flex2's display has a 700mm-radius curvature, while the back is slightly sharper with a 650mm-radius curvature for grip. LG says the Corning Gorilla Glass 3 has been toughened approximately 20 percent from the previous generation with the firm's own special chemical treatment technology - LG calls this Dura-Guard glass. The whole phone is supposedly 30 percent more durable than the original.

The company has also improved upon the 'Self Healing' back from the original LG G Flex, and it will now get healed within 10 seconds at room temperature - significantly lower than the last-generation's three minutes.

The LG G Flex2 sports a rear 13.0-megapixel camera with optical image stabilisation (OIS+), dual-LED two-tone flash, and laser-guided autofocus just like the LG G3. It sports a 2.1-megapixel front-facing camera. The G Flex2 will come in 16GB and 32GB storage variants that are expandable via microSD card.

The other features include things like a simple hand 'Gesture Shot' recognisable from up to 1.5 metres away; 'Gesture View' to check last clicked shot; 'Glance View' to swipe down for notifications even when the screen is off, and 'Fast Charging' - which can charge the battery up to 50 percent in under 40 minutes.

Juno Cho, President and CEO of the LG Electronics Mobile Communications Company, said of the launch, "The original G Flex demonstrated LG's pioneering spirit and with the G Flex2 we have refined the curved form factor, staying true to our philosophy of innovation for a better life. The G Flex2 not only has the stunning looks, it also has the powerful guts to be at the cutting edge of current smartphone technology. Simply put, it's a true head-turner in every sense of the word."