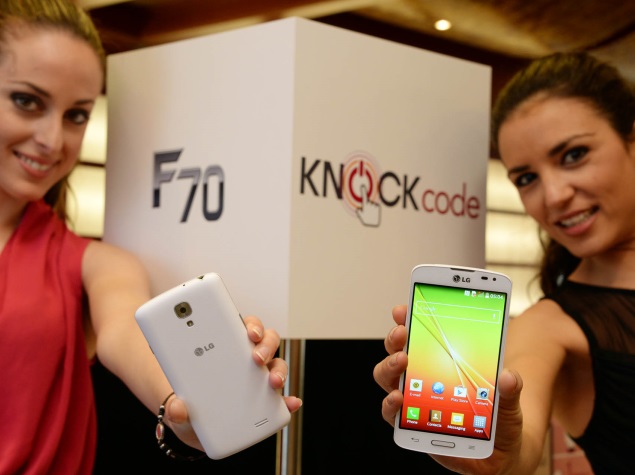 LG has announced a new LTE-enabled smartphone, dubbed LG F70, at MWC 2014 in Barcelona. Unfortunately, the company has not revealed any details of the availability or pricing of the new LG F70 smartphone. The company's new smartphone runs Android 4.4 KitKat out-of-the-box. The South Korean giant is targeting the LTE consumers worldwide with its new LG F70 smartphone.

The LG F70 comes with a 4.5-inch WVGA (480x800 pixels) IPS display and offers a pixel density of 207ppi. The LG F70 is powered by a 1.2GHz quad-core processor (unspecified chipset) alongside 1GB of RAM. It bears 4GB of inbuilt storage, which can be expanded up to 32GB via microSD card. The LG F70 sports a 5-megapixel rear camera and also packs a VGA front-facing camera. The smartphone runs on a 2440mAh (removable) battery and measures 127.2x66.4x10mm.

The new LG F70 also comes preloaded with the company's new advanced UX feature, Knock Code, which is an upgrade to the KnockON feature that was introduced in the flagship 2013 smartphone, the LG G2. The Knock Code feature allows users to both power on and unlock the LG smartphone by tapping a personalized pattern on the phone's screen. According to the company, the new Knock Code feature offers greater security as the pattern is entered on a blank screen using anywhere from two to eight taps, allowing for more than 80,000 possible combinations.

Commenting on the announcement, Dr. Jong-seok Park, president and CEO of LG Electronics Mobile Communications Company said, "Not only does the LG F70 offer the best of LTE technology, its hardware and UX are also best-in-class. Utilizing our expertise in the field of 4G technology, we plan to strengthen our leadership in the global market."

BlackBerry Z10 price in India slashed to Rs. 17,990 for a limited time
BlackBerry Z3 and BlackBerry Q20 announced at MWC 2014