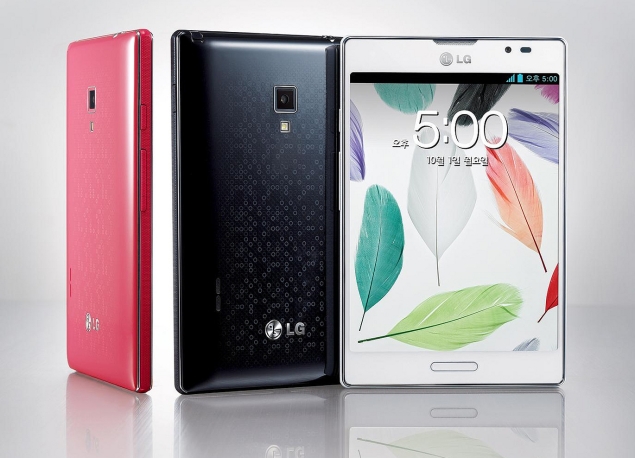 It seems to be a season of phablets. First, we had Samsung announce a sequel to its Galaxy Note in the form Galaxy Note II at IFA and now LG too has got its contender in the market with LG Optimus Vu II. LG had sent out feelers about this device at IFA and now the company had made it official in Korea.

LG Optimus Vu II sports a 5-inch screen and runs on Android Ice Cream Sandwich. Just like the original Optimus Vu device, the Optimus Vu II has an unusual aspect ratio of 4:3. There is a Qualcomm 1.5Ghz dual-core processor on board with 2GB RAM. For imaging needs, it comes with an 8-megapixel autofocus rear shooter and a 1.3 megapixel front camera. LG Optimus Vu II also has a 2150mAh battery and 3 GB of internal storage. It is available in three colour options - white, black and pink.

When compared to its predecessor, LG Optimus Vu II has slimmer bezels that make this device 7mm shorter and 5mm wider.

Not only has LG tweaked the design of the new Optimus Vu II, but also brought a few changes to its "Rubberdium Pen 2.0" stylus. The Pen of the Optimus Vu II has a slimmer nib, which LG feels will facilitate more accurate handwriting.

LG has also announced a couple of interesting accessories along with this new device. These include a wireless charging pad and a waterproof One Key remote. The One Key remote will help you find your device at a mere touch of a button and its multicolour LED flashes to show calls, messages, charging status and other alerts.

For now, this device is available only in Korea for 966,900 won ($864) and there is no official word on its availability and pricing in India.