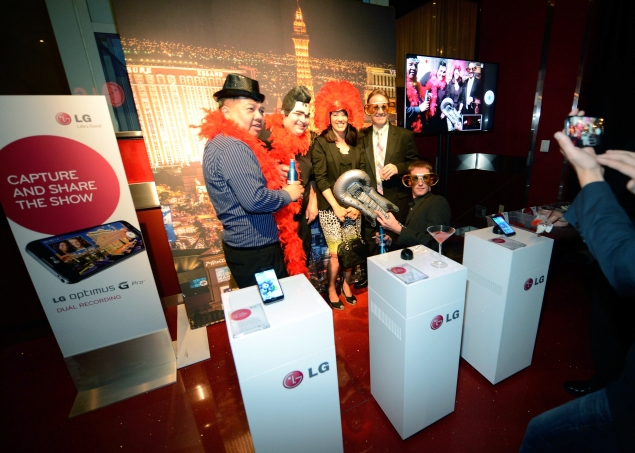 Korean electronics major LG, which has been reworking its mobile phone business in the country, today set a target of doubling its market share in the Indian

smartphone segment to 10 percent by the end of next year.

"We were reshaping our mobile phone business. It took us and one and half years to do so. At present our market share is close to 5 percent in the country, which we expect to increase to 10 percent by end of of next year," LG India Managing Director Soon Kwon told reporters.

He was speaking at the launch of the company's new touch screen smartphone with quad-core processor 'LG Optimus G Pro', priced at Rs 42,500 - the highest priced phone from LG's stable for Indian market.

With this launch, the company has entered into the high-end smartphone segment ranging around Rs 40,000, eyeing a slice of the share from competitors like BlackBerry, Samsung, Sony and Apple's iPhone.

LG Optimus G Pro runs on Android 4.1 (Jelly Bean) operating system. It comes with 13-megapixel rear camera and 2.1-megapixel front camera. This phone has features, wherein both cameras can record video simultaneously and a user can see the images on the same screen while recording.

The company announced investment of Rs. 80 crore to push its sales. Kwon said LG will launch around 30 new models across various price points by the end of 2014.

"LG expects to sell 1 million smartphone this year. As a part of our strategy, we will be adding 100 to 150 retailers every month to expand our reach. At present, we sell through 1,600 top retailers, which we expect to increase to over 3,000 retailers by end of this year," he said.

He said that company's smartphone have silicon oxide battery developed in-house which have higher current density, needs less recharge and are thinner compared to lithium battery.

"The smartphone has pushed demand for data and video consumption which needs better battery life. At any time, the battery backup in LG phones will be 1.25 times better than any other smartphone in similar category," Kwon claimed.

When asked about the services for the phones, Kwon said the company will apply one hour service norms on smartphones as well for an engineer to visit the customer's doorstep.

"Customer will need to just call on our call centre. The details and time for engineers visit will be decided as per customer's convenience within an hour and conveyed to him," Kwon said.

LG has at present around 600 service centres across the country.

(With inputs from PTI)