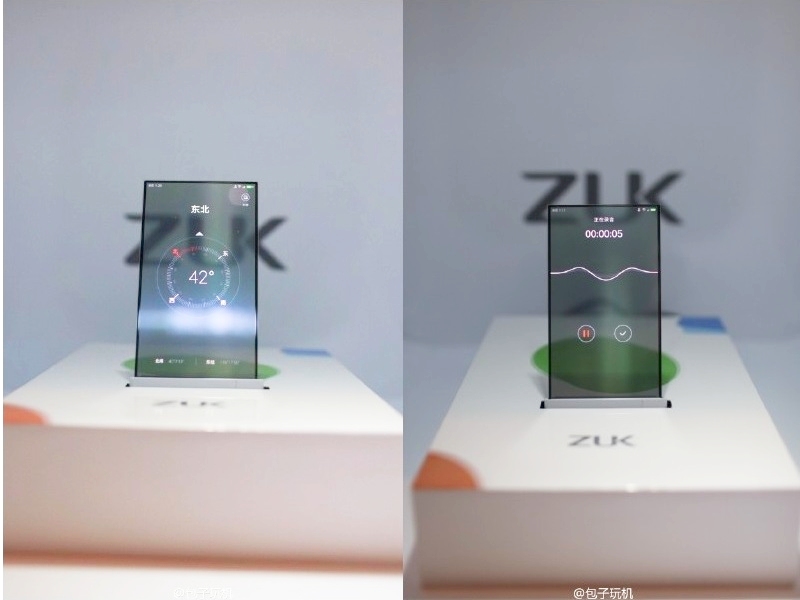 Earlier this week we saw Zuk, Lenovo's online-only brand, launching its first smartphone in China named the Zuk Z1. The firm has also showcased a smartphone prototype, the highlight of which is a transparent display.

In a series of images posted on Weibo from the Z1 launch event on Tuesday, the prototype smartphone is seen featuring a near bezel-less frame on the transparent glass-like display. The prototype is said to perform almost all functions of a traditional smartphone such as displaying images, making phone calls, play music, and more, and features an Android-like interface.

While there is no information revealed about the transparent display of the Zuk smartphone prototype, the image showing a picture of a girl on the display does hint towards a high pixel density. Needless to say, since this is a prototype smartphone, we would not be seeing it hitting the markets just yet, not at least until next year. In addition, the tech required to create transparent displays is not yet widely available. The prototype reveal was first reported by Gizmo China.

Zuk earlier this week launched its first smartphone named Z1 in China, priced at CNY 1,799 (approximately Rs. 18,250). Lenovo's new online-only brand is aimed at countering the rise of Xiaomi in China, which too has followed a low-cost online-only model. While Lenovo so far has not detailed any plans to launch its online-only smartphone brand outside China, it is expected the company may bring the brand to other markets. Zuk Z1 is one of the few smartphones that feature USB Type-C port, a large 4100mAh battery, fingerprint sensor, and a 13-megapixel rear camera with Sony sensor (IMX214) and optical image stabilization (OIS), a feature that's found in select high-end smartphones.