Lenovo Z6 Pro to Be Unveiled at MWC 2019 Next Week, VP Confirms 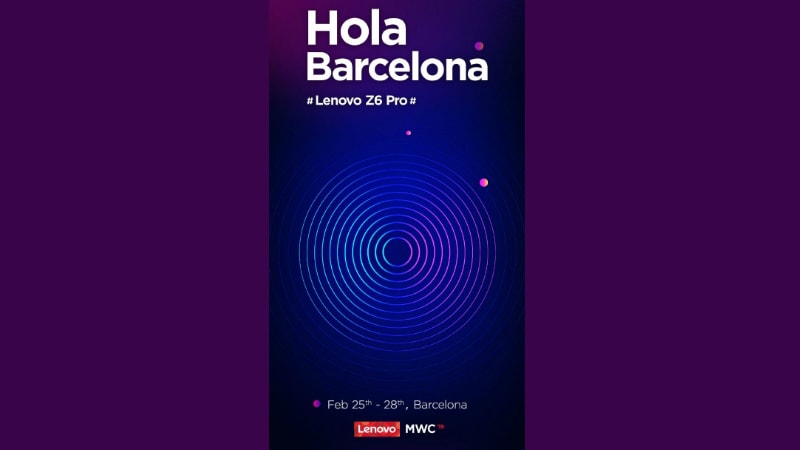 While most of the big OEMs like Huawei, LG, Xiaomi, HMD Global, Microsoft, and Oppo have confirmed their presence at Mobile World Congress (MWC) 2019, Lenovo was quiet up until now. Now, the Lenovo Group VP Chang Cheng has confirmed that the company will also be present at the four-day fair and will be showcasing its Lenovo Z6 Pro smartphone. The Lenovo Z5 Pro successor comes just a few months after the launch of the predecessor in November last year. The MWC 2019 runs from February 25 to February 28.

Cheng took to Weibo to announce that the Lenovo Z6 Pro will be showcased at MWC 2019 in Barcelona. The announcement poster is pretty minimal revealing nothing about the next-gen device. The ripples in the middle may suggest that the smartphone could sport an in-display fingerprint sensor, something that its predecessor also integrated. The company just launched the Lenovo Z5 Pro in November last year, with a slider design and a dual camera setup at the back. A Lenovo Z5 Pro GT variant with 12GB RAM and the latest Snapdragon 855 processor was unveiled a month later. The Lenovo Z6 Pro should presumably build up on these phones and bring updated cameras, new design, and better specifications.

Unlike previous times, where Lenovo indulged in guerilla marketing tactics with the Lenovo Z5 launch, making tall claims in teasers and falling short on promises at launch, it has taken a different route with the Lenovo Z6 Pro. This is the first time we are hearing of the smartphone from Cheng, who is famous for releasing continuous teasers way before launch. MWC is just days away, and we should know more about the Lenovo Z6 Pro then.

Lenovo may just put it up for display revealing key design details, but may make actual market announcements later. All of this is speculation at this point, and we will report more after we visit the Lenovo stall at MWC.