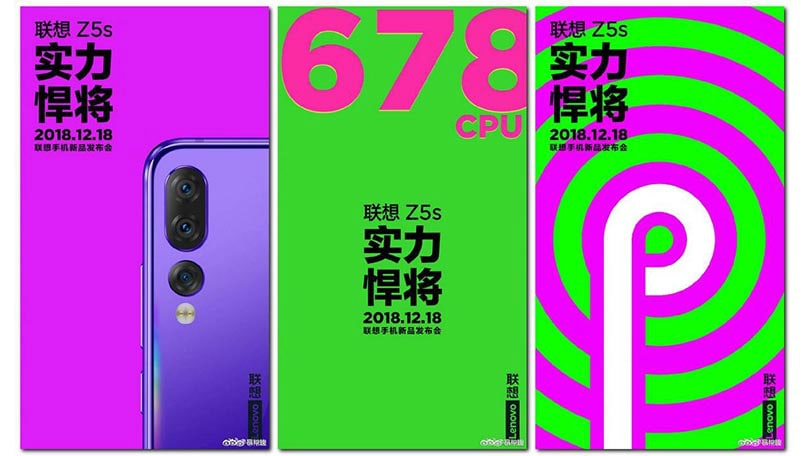 Lenovo Z5s will launch in China this month

Now that the Lenovo Z5s is set for launch on December 18, teasers for the upcoming smartphone have become more regular. The smartphone is confirmed to sport a triple rear camera setup, and was even spotted on TENAA a while back. Now, Lenovo VP Chang Cheng has released new teaser posters that state the Lenovo Z5s is powered by the yet-to-be-released Qualcomm Snapdragon 678 processor, and run on Android 9 Pie out-of-the-box. The posters also reiterate that the smartphone is set to launch in China on December 18.

Cheng shared several teasers on Weibo, claiming that the Lenovo Z5s will be powered by the not-yet-released Snapdragon 678 processor, run on Android Pie out-of-the-box, and sport a triple rear camera setup. The posters reiterate that the smartphone will be launched on December 18. There's no Snapdragon 678 SoC in Qualcomm's portfolio as of yet, so we expect the company to announce it alongside the launch of the Lenovo Z5s. Also, the Android Pie software will come with the company's own ZUI customisations.

Earlier, Lenovo VP Chang Cheng had confirmed that the Lenovo Z5s will launch on December 6, but that didn't happen, and then announced a December 18 launch date. The smartphone will be launched a day after the launch of the Huawei Nova 4 in China - the smartphone that will sport a display hole for selfie camera design.

As per a TENAA listing, the Lenovo Z5s is expected to sport a 6.3-inch waterdrop-shaped notch display, 156.7x74.5x7.8mm dimensions, a triple camera setup, a metal finish on the back, and a rear fingerprint sensor as well. As per posters, the triple camera setup at the back is tacked vertically, with the flash sitting beneath all the sensors. In one of the posters, the Lenovo Z5s is also seen sporting a blue finish at the back, but more colour options are expected at launch.

So far, this is all we know of the Lenovo Z5s, and we recommend you to take all of this information lightly, given Lenovo's reputation of building false hype.

Fortnite Gamer in Australia Arrested After He Live-Broadcasted a Woman's Screams
A Series of Unfortunate Events Season 3 Trailer: More Adventures for the Baudelaires in Final Season of Netflix Series