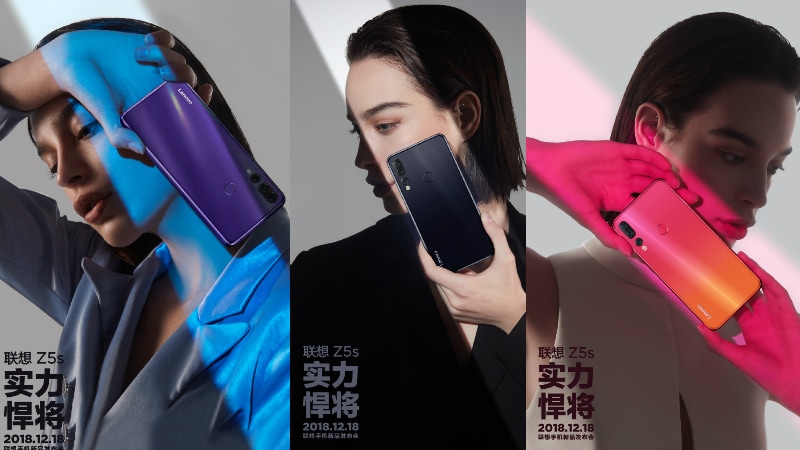 Lenovo Z5s is all set to launch on December 18

Lenovo Z5s is all set to launch at 2pm CST (11:30am IST) December 18 i.e., tomorrow, and Lenovo is on overdrive mode to release all the teasers out before the official event takes place. Lenovo has published several posters of the Lenovo Z5s revealing three colour options, and also back design details, something that it has been doing since a while. The Lenovo Z5s has been leaked to come in two variants - the second one being called the Lenovo Z5s Ferrari SuperFast variant - and it is expected to pack 12GB RAM and a Snapdragon 845 chipset.

Starting with the colour options, the Lenovo Z5s new teasers posted by the company on Weibo suggests that there will be three variants to choose from - Coral Orange, Quite Blue, and Starry Night. Coral Blue and Quite Blue will be gradient offerings with the former being a mix of coral and orange, and the latter reflecting rainbow colours at different angles in sunlight.

The Starry Night option is just a classic glossy black colour options for all those who aren't into the gradient trend. These posters also reiterate that the smartphone will sport a triple camera setup at the back with flash support, and a rear fingerprint sensor as well.

A new leak on Weibo suggests that the Lenovo Z5s will come in multiple variants - one of them being a Ferrari SuperFast variant with 12GB of RAM and Snapdragon 845 SoC. The image leak also suggests that the smartphone will run on ZUI 10 and offer 128GB of inbuilt storage. No phone so far packs 12GB of RAM, with only a handful packing 10GB RAM. If this leak is indeed true, then Lenovo will be setting a new record in the RAM department at least. Lenovo VP Chang Cheng had shared a teaser poster earlier hinting that the Lenovo Z5s will pack more than 8GB of RAM, and he may have been hinting at this variant at the time.

Other teasers published by Lenovo confirm that the smartphone will be powered by a better processor than the Snapdragon 636 found on the Lenovo Z5. These posters also hint at camera skills, and a waterdrop-shaped display up front. You can see all the posters below. A separate poster shared by Lenovo VP Chang Cheng also suggests at 92.6 percent screen-to-body ratio.

As per a TENAA listing, the Lenovo Z5s is expected to sport a 6.3-inch waterdrop-shaped notch display, and 156.7x74.5x7.8mm dimensions. As mentioned, the smartphone is teased to be powered by the as-yet-unannounced Snapdragon 678 SoC, and run on Android Pie out-of-the-box. So far, this is all we know of the Lenovo Z5 and all details will become official next week. We recommend you take all the details with a pinch of salt, as Lenovo is known to make tall claims and fall short when it comes to delivering promises.

The Escalating Cold War Over 5G