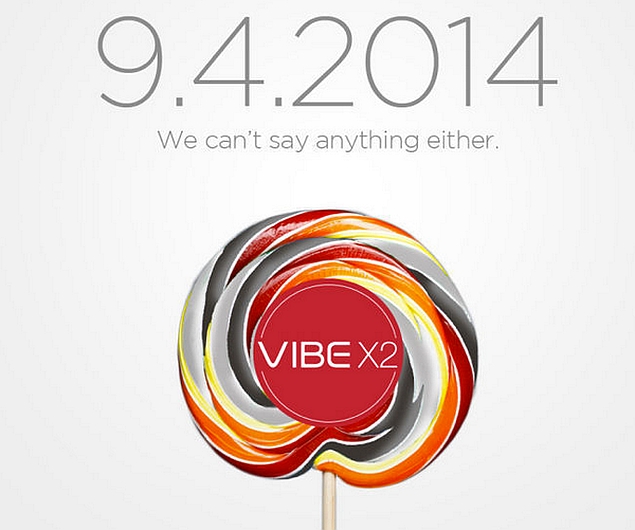 On the invitation, Lenovo shows a big lollipop (appearing to be referring to Android L) with the Vibe X2 name written at its centre. The invite also contains a tongue-in-cheek reference to Apple's September 9 invite, which had said "Wish we could say more." Lenovo on its own invite says, "We can't say anything either."

While we will know more about the Vibe X2 in less than a week's time, recent leaks (via gdgtarena have pointed a 2.2GHz dual-core processor, 5-inch full-HD touchscreen, 2GB of RAM, 32GB inbuilt storage, 13-megapixel rear camera with LED flash, and a 5MP front-facing camera.

Based on the leaks, the Vibe X2 features nearly the same specifications as its predecessor, the Vibe X, except a bumped-up processor. The Vibe X was launched in December last year and got a price cut by roughly Rs. 3,000 in May this year - bringing the cost down to Rs. 22,999.

With the Vibe X2 launch invite, Lenovo may just have revealed that the real name of Android L is Lollipop, and not Lemon Meringue Pie as recently reported. Of course, until Google confirms the name - even such a revelation by a Google partner cannot be taken as confirmation.

Women Addicted to Texting, Men Can't Live Without Facebook: Study
Apple iWatch May Launch at $400, Available Only Next Year: Report