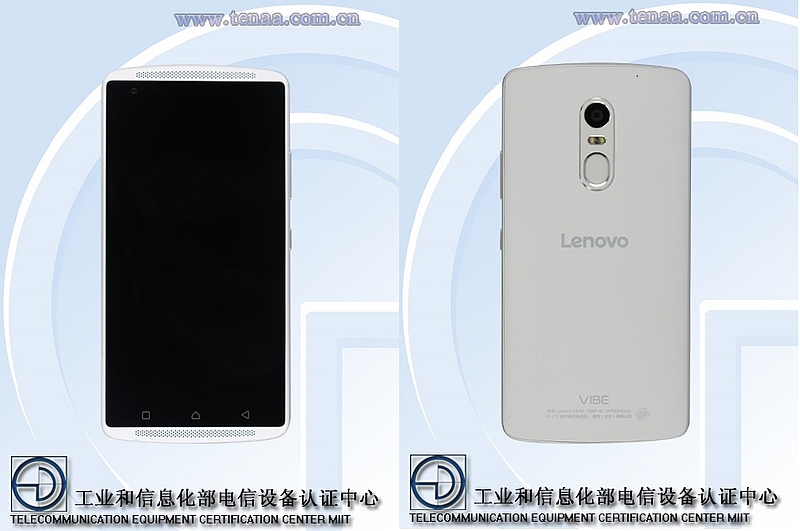 Looks like Lenovo, which launched phablets and smartphones during IFA 2015, has one more smartphone up its sleeves called the Vibe X3. The handset has not been launched as of yet but has showed up under in a Tenaa (China's Telecommunications Certification Center) listing.

The unannounced Vibe X3, as per the listing, would run Android 5.1.1 Lollipop out-of-the-box and feature a 5.5-inch full-HD display. A hexa-core Qualcomm Snapdragon 808 processor is said to power the handset, paired with 3GB of RAM.

From the looks of it, the Lenovo Vibe X3 will house a fingerprint sensor at the back, below the 21-megapixel rear camera and dual-LED flash. The front-facing camera would include an 8-megapixel sensor. The Vibe X3 is seen sporting dual front-facing speakers as well. It would support 4G LTE connectivity, measure 154x76.49.4mm, and weigh 175 grams. While the right side includes a power button and volume buttons, the left side features a SIM/microSD card slot.

Although the firm has not revealed any price or the launch date of the device, it is expected to hit the shelves soon as it has passed Tenaa certification. Looking at the specifications of the device, the handset is likely to fall in the premium smartphone segment.

Lenovo during its IFA 2015 event launched the Vibe S1, Vibe P1, and Vibe P1m smartphones, and NDTV Gadgets got to spend some time with the smartphones. We also got our hands on the Lenovo Phab and Phab Plus during the trade show. The firm also launched IdeaPad laptops, other Windows 10 laptops, and Yoga tablets at IFA 2015.