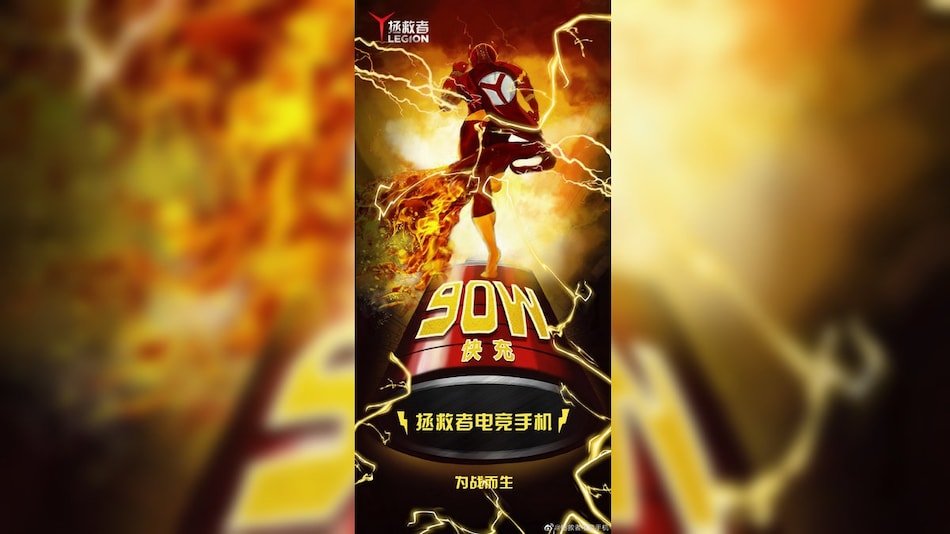 Lenovo has revealed that its Legion Gaming phone will come with 90W fast charging support. Once launched, the smartphone can be expected to offer the fastest wired charging supported by any smartphone in the world. The company had hinted through a poster in February that the Legion Gaming phone will support higher than 55W fast charging. It had previously announced that the gaming-centric smartphone will be powered by Qualcomm Snapdragon 865 SoC. The new Legion smartphone is also touted to come with ground-breaking cooling technology to provide a smooth gaming experience to the users.

Legion Gaming phone is expected to get fully charged faster than all the other fast charging smartphones. However, in the poster shared on Weibo, Lenovo has not specified the amount of time required for charging the smartphone. Currently, Oppo Reno Ace comes with 65W SuperVOOC fast charging technology. The company claims that the technology can charge the smartphone from zero to 17 percent in just 5 minutes that can provide 2 hours of battery backup. Moreover, Oppo claims that the charger can provide 100 percent of charge to the phone with a 4,000mAh battery in just 30 minutes. It is expected that the upcoming Lenovo Legion Gaming phone will get fully charged in less than 30 minutes.

Lenovo has already revealed some of the Legion Gaming smartphone's specifications and features. As mentioned earlier, the Legion Gaming phone will feature a “disruptive” cooling technology to keep the phone cool, a big cause of concern for the gamers. The gaming experience will get a boost, thanks to the Qualcomm Snapdragon 865 SoC the gaming phone will be featuring. The Black Shark 3 and Black Shark 3 Pro gaming smartphones also come with the same SoCs.

With the new gaming smartphone, Lenovo's Legion brand will compete with Black Shark, Nubia, iQoo, and Asus that are in the market with their gaming smartphones. So far, nothing has been revealed by Lenovo regarding the launch date and price of the smartphone.

Google Phone App Shows Up on Play Store, Can Be Installed on Non-Pixel Phones
Amazon Fills 100,000 Jobs in the US to Meet Demand From Coronavirus Outbreak, Will Add 75,000 More