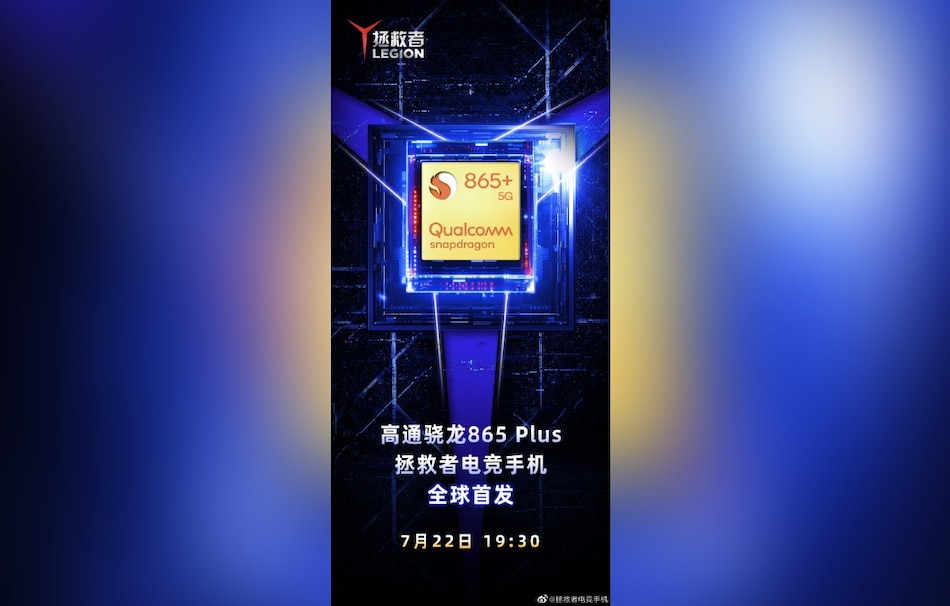 Lenovo Legion Gaming Phone, the much-anticipated gaming smartphone from the Chinese tech firm, is set to be launched on July 22. The brand also confirmed that it will be powered by the new Qualcomm Snapdragon 865 Plus aka Snapdragon 865+ chipset. The news comes a day after a Lenovo phone thought to be the upcoming device showcased impressive results on AnTuTu benchmarks, including superb graphical performance. The July 22 release date coincides with the global launch of the Asus ROG Phone 3 - which was also revealed on Thursday to be powered by the Snapdragon 865+ SoC.

Lenovo took to Weibo to share the news, where it not only confirmed the release date and time, but also confirmed that the device will come equipped with the latest Qualcomm Snapdragon 865 Plus aka Snapdragon 865+ SoC. The post also reveals that the launch time will be 7:30pm CST or 5pm IST.

The Lenovo Legion Gaming Phone will share its launch date with Asus ROG Phone 3, whose launch event is set to kick off on July 22 at 8:15pm IST. Expected to be Legion's biggest rival, ROG Phone 3 will also come packed with Snapdragon 865+. While the Asus offering is expected to be launch all over the world, including India, not too many details have yet surfaced on the reach of Lenovo Legion's launch.

Jerry Tsao, Vice President of Lenovo's Mobile Gaming Group Emerging Markets, confirmed in a statement that Lenovo Legion will be the brand's first offering to come packed with Snapdragon 865+. “Lenovo Legion will be amongst the first to offer the new Snapdragon 865 Plus in our expanding family of gaming devices this year. Lenovo has a long history of co-engineering amazing consumer experiences with Qualcomm Technologies and we can't wait to share more soon,” he said.

The Lenovo model L79031's AnTuTu listing showcased some impressive benchmarking figures. With a total score of 648,871 points, it also revealed that the phone may be carrying 16 GB RAM (expected to be LPDDR5) and inbuilt space of 512GB. Apart from the Snapdragon 865+ SoC, it is expected to come with an Adreno 650 GPU, UFS 3.1 storage, and a display refresh rate of 144Hz.

In May, a report revealed some of the expected features of the phone's camera. Lenovo Legion may come with two rear-facing cameras (64-megapixel and 16-megapixel) along with a 20-megapixel selfie camera on the front. It is also speculated that the rear cameras placed uniquely at the centre of its back panel.

In terms of software, the Lenovo Legion will run on Android 10, supported by the brand's gaming-oriented Legion UI on top.

Instagram Reels: How to Watch Reels on Instagram
Microsoft Teams Getting Together Mode to Reduce Fatigue During Video Meetings