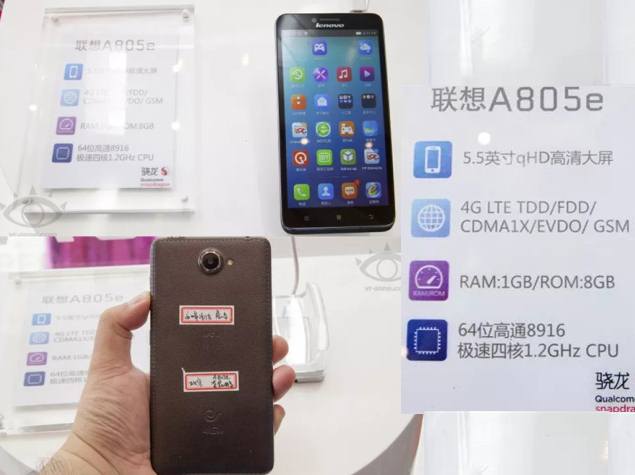 While the pricing and availability is not officially announced for the Lenovo A805e, reports indicate it might release in the middle July, which is earlier than originally slated, priced under $200 (approximately Rs. 12,000).

The primary rear camera on the Lenovo A805e features an 8-megapixel sensor, however, while a front-facing camera is present, its resolution is not known. The Lenovo A805e is backed by a 2500mAh battery and offers NFC and 4G LTE connectivity. The handset will be available in Black, White or Champagne Gold, and features a faux leather design(see above) by Lenovo.

Other than the Lenovo A805e, LG also showcased the G3 Beat at the exhibition event by China Telecom and Qualcomm, a smartphone that is expected to be called the LG G3 mini when it is launched globally.

With no word on its price and availability, the LG G3 Beat (LGD728) comes with a 5-inch IPS display, contrary to the 4.5-inch display expected on the LG G3 mini. The firm has also dropped the screen resolution from QHD (1440x2560 pixel) on LG G3 to the considerably lower HD resolution of 720x1280 pixels on the LG G3 Beat.