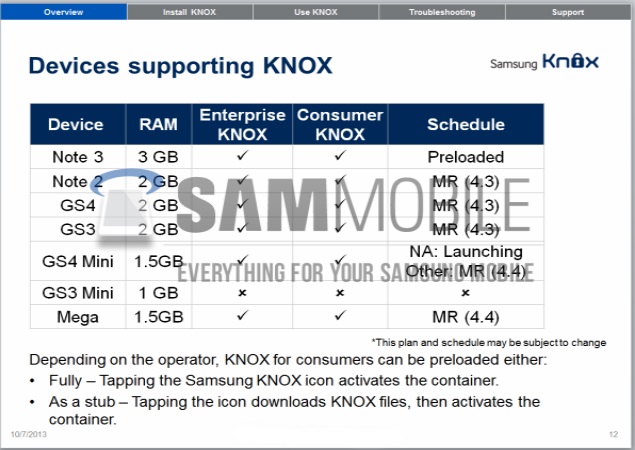 A new report has revealed that the Android 4.4 KitKat firmware update for Samsung Galaxy S4 mini, Galaxy Mega 5.8 and Mega 6.3 might be rolled out soon.

Sammobile has obtained an image of the internal document for Samsung's security suite, Knox, that allegedly reveals a list of Galaxy smartphones due to get Android 4.4 KitKat.

The leaked image shows the Samsung Galaxy S4 mini and Galaxy Mega (Mega 5.8 and Mega 6.3) supposed to come preloaded with Knox once the devices are updated to Samsung's Android 4.4 KitKat-based firmware.

Unfortunately, the list does not reveal anything about the possible release date of Android 4.4 KitKat for these smartphones. Earlier it was reported that the Samsung Galaxy S III, Galaxy S4 and Galaxy Note II would be upgraded to Android 4.3 Jelly Bean by year-end. The company was said to be planning an Android 4.3 update for its top of the line smartphones soon.

The site further suggests that Knox will be preloaded on all the devices- Galaxy Note 3, Galaxy Note II, Galaxy S4, Galaxy S4 mini, Galaxy S III, Galaxy S III mini and Galaxy Mega once they receive the respective firmware updates as listed in the leaked image of Knox security suite.

The report further suggested that the Galaxy Note II, Galaxy S4 and S III would also be getting the taste of the new Jelly Bean iteration, but that would only be by the end of November, or early December. All three smartphones are also likely to receive a revamped TouchWiz interface with some added functions, claimed the report.

Tablets to comprise half of first-time PC purchases by 2017: Gartner
Narendra Modi the most searched candidate: Google India's voter survey