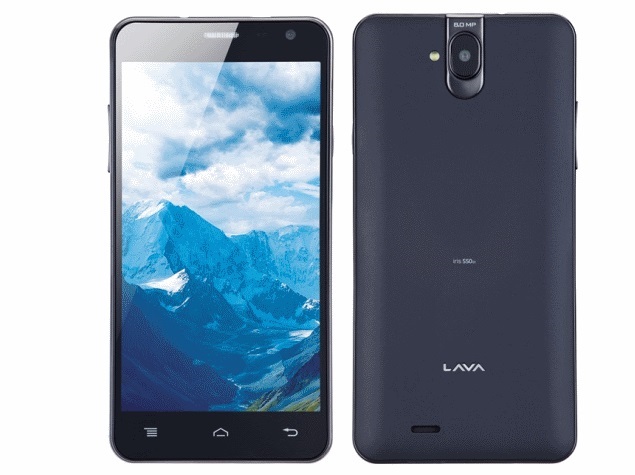 The Lava Iris 550Q has been launched in India at a price of Rs. 13,000. The popular domestic handset maker has announced that the Iris 550Q will be available starting this month; though it has not revealed the exact release date. The Iris 550Q will come with free flip cover.

The Android 4.2 Jelly Bean-based Lava Iris 550Q phablet will be available in Black colour variant. The company has claimed that the new phablet is upgradable via FOTA (firmware over the air).

The Lava Iris 550Q supports dual-SIM (GSM+GSM) functionality, and comes with a 5.5-inch (720x1280 pixels) HD IPS display with OGS (one glass solution) technology. It is powered by a 1.2GHz quad-core processor that is coupled with 1GB of RAM. The phablet features 4GB of inbuilt storage, which is further expandable up to 32GB via microSD.

The Lava Iris 550Q sports an 8-megapixel rear camera with LED flash and BSI sensor, while there is a secondary 2-megapixel front-facing camera. On the connectivity front, the Lava Iris 550Q includes 3G, Wi-Fi, Micro-USB, and Bluetooth. Also onboard are accelerometer, gyroscope, proximity, and ambient light sensors. The phablet packs a 2600mAh battery, which according to the company, delivers up to 10 hours of talktime on 2G network.

It features a 5-inch FWVGA (480x854 pixel) display with a 16 million colours gamut. The Iris 503e is powered by a 1.2GHz dual-core (unspecified chipset) processor coupled with 512MB of RAM. The Iris 503e comes with a 3-megapixel rear camera along with a LED flash support and a 1.3-megapixel front-facing camera selfies and video chats. The handset supports an additional 32GB expansion via microSD with 4GB of inbuilt storage on the device, from which less than 2GB will be available to users.