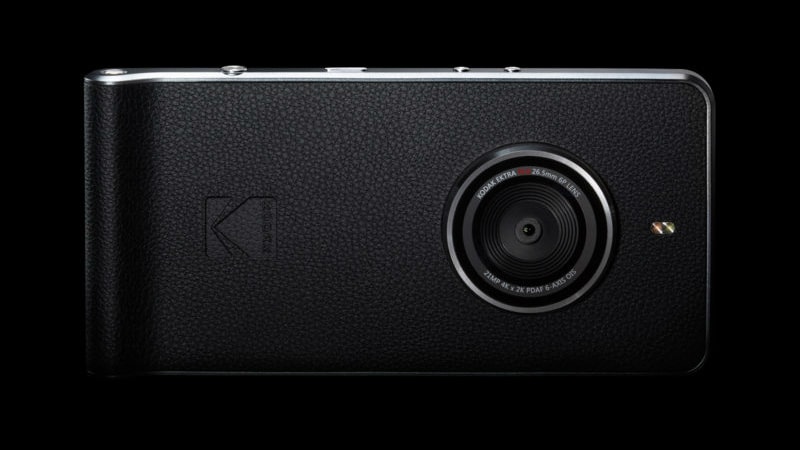 In a bid to entice photo enthusiasts, camera company Kodak has launched the photo-focused Ektra smartphone. The smartphone has a unique design with a huge camera lens at the back, and it boasts of DSLR-like modes and features. The smartphone has been launched in Europe at €499 (roughly Rs. 36,800).

The Kodak Ektra smartphone is manufactured by a UK-based company called Bullitt Group. The firm has licensed Kodak's intellectual property and brand to make this smartphone. It has a huge 21-megapixel fast-focus camera rear sensor with OIS, f/2.0 aperture, PDAF, and dual-LED Flash. There's an additional 13-megapixel front camera with f/2.2 aperture and PDAF for selfies.

The smartphone's large rear sensor protrudes out of the smartphone significantly, but a slight curve design at the bottom looks to balance things out at surface level. Furthermore, the lens has a metal ring to protect it from wear and tear.

As for the other specifications, the Kodak Ektra features a 5-inch full-HD (1080x1920 pixels) display with 441 ppi pixel density. It is powered by a 2.3GHz Helio X20 deca-core processor paired with 3GB of RAM. The smartphone offers 32GB of internal storage with the option to expand further via a microSD card slot. Furthermore, it packs a 3000mAh battery, supports USB Type-C charging, and measures 147.8mmx73.35mmx9.69mm.

Kodak's foray into the smartphone market last year with the Kodak IM5 was largely unsuccessful. It remains to be seen whether the Kodak Ektra fares any better.